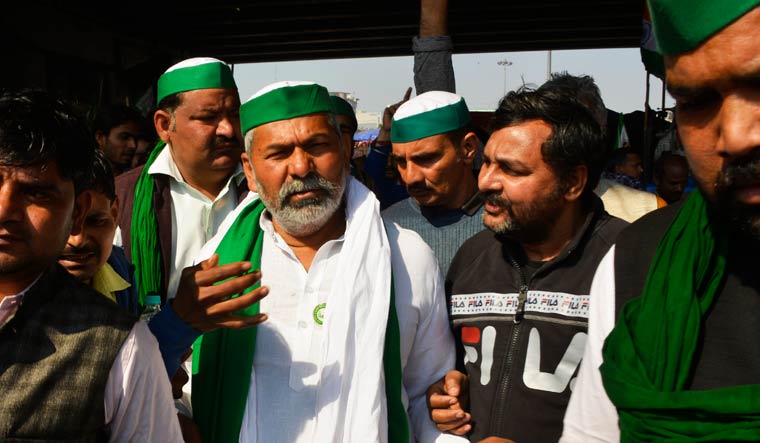 Farmer leader Rakesh Tikait on Sunday said that the Samyukta Kisan Morcha will not allow Haryana Chief Minister Manohar Lal Khattar to enter Badauli village for an event on April 14.

Speaking to the media at the Singhu border, Tikait alleged that Khattar is coming to "disrupt the amity" in the area in the garb of unveiling a statue of B R Ambedkar.

"We are not against Baba Saheb's statue, we are against Khattar. Samyukta Kisan Morcha has decided that as long as our protest is on we are against the CM and the deputy CM.

"He is not coming here to unveil the statue, but as per the BJP's plot he is coming here to disrupt the amity among people. And we, along with the Khap Panchayat, we will not allow him to do that," Tikait said.

Khattar is scheduled to visit Badauli village in Panipat to unveil a statue of Ambedkar on the occasion of the Dalit icon's birth anniversary on April 14.

"We won't let him enter the village. If anyone else wants to unveil the statue, they can do it," Tikait added.

Hundreds of farmers, mostly from Punjab, Haryana and western Uttar Pradesh, have been camping at three border points of Delhi -- Singhu, Tikri (along Haryana), and Ghazipur --demanding a repeal of three farm laws enacted by the Centre in September last year.

The Centre says the new laws will free farmers from middlemen, giving them more options to sell their crops.

The protesting farmers, however, say the laws will weaken the minimum support price (MSP) system and leave them at the mercy of big corporates.