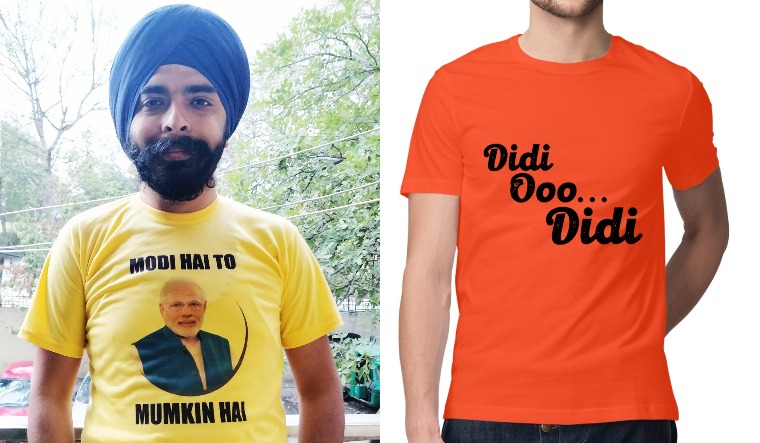 Ever since she emerged as the main opposition leader against the Left Front regime that ruled West Bengal for four decades, Mamata Banerjee has been affectionately referred to as Didi (elder sister). The practice continued as she became chief minister in 2011 when the Trinamool Congress dislodged the Left Front.

But like most monikers, the word Didi is now an object of electoral wrangling. Multiple BJP leaders have used the word regularly when highlighting Mamata's purported failures. Prime Minister Narendra Modi himself has repeatedly taunted Mamata at his rallies, using the phrase 'Didi o Didi' when questioning her alleged shortcomings as head of the state government.

Modi's use of the phrase had angered TMC supporters. TMC MP Mahua Moitra equated Modi's behaviour to that of a "street-side fellow".

Early on Wednesday, BJP Delhi unit spokesperson Tajinder Pal Singh Bagga decided to troll Mamata using the 'Didi' word, but in his own unique way. Bagga re-tweeted posts from T-Shirt Bhaiya, a T-shirt company he started in 2017, of a new T-shirt with the words 'Didi ooo Didi' emblazoned on it.

T-Shirt Bhaiya launched the 'Didi ooo Didi' line of T-shirts on Tuesday. The ‘Didi ooo Didi’ T-shirts are available in at least seven colours, including orange/saffron, white and yellow. The T-Shirt Bhaiya website has opened pre-booking for the T-shirts, which it is selling for rs 395.

Bagga has figured in the ongoing campaign for the West Bengal Assembly polls. Bagga was accused of leading a group of BJP supporters who tore up posters opposing the party that were put up at Kolkata's iconic Coffee House in March. However, Bagga had claimed he was having coffee when a group opposed to the BJP confronted his associates. Mamata had decried the incident at the Coffee House and referred to Bagga as an "outsider goon" and a "rioter".

The Trinamool Congress had previously referred to Bagga as an "outsider goon" in May 2019 when he was allegedly involved in violence during a rally by then BJP chief Amit Shah in Kolkata ahead of the Lok Sabha polls.

T-Shirt Bhaiya has previously made controversial T-shirts. In 2017, soon after the company's launch, it unveiled a T-shirt of an infamous 'human shield' incident in Jammu and Kashmir when an Indian Army officer tied a native in front of a jeep. The release of the T-Shirt triggered outrage. Then, Bagga had rejected the criticism and declared he would continue selling the T-Shirt.