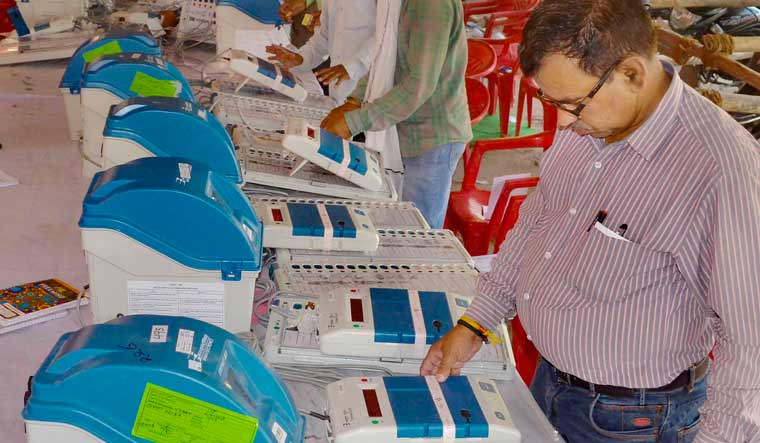 On Thursday night, violence had broken out in Karimganj district of Assam after a crowd spotted a BJP candidate's vehicle being used to transport a polled EVM to the strong room, forcing the police to fire in the air to bring the situation under control. The incident has long snowballed into a huge controversy with the opposition Congress and AIUDF alleging that the EVM was being "stolen", prompting the Election Commission to suspended four poll officials and order a repoll at the booth as a video of the fiasco went viral on social media.

The Congress on Friday urged the EC to take strict action against BJP, and demanded that security be increased for the final phase of assembly election in the state on April 6. Congress General Secretary Randeep Singh Surjewala also sought the lodging of an FIR against the BJP candidate and his immediate interrogation to uncover the truth behind the incident.

Congress leader Rahul Gandhi took a swipe at the Election Commission, tweeting in Hindi that the "EC's car has broken down, the BJP's intentions are bad and the condition of democracy has worsened".

Congress general secretary Priyanka Gandhi Vadra said the Election Commission needs to start acting decisively on reports of private vehicles transporting electronic voting machines, and a serious re-evaluation of the use of EVMs needs to be carried out by all national parties. "Unsurprisingly they have the following things in common: The vehicles usually belong to BJP candidates or their associates. The videos are taken as one-off incidents and dismissed as aberrations. The BJP uses its media machinery to accuse those who exposed the videos as sore losers," she said. She alleged that too many such incidents are being reported and nothing is being done about them.

Several political parties in the past have alleged that the EVMs are prone to tampering and demanded reintroduction of the ballot papers. At the same time, the Election Commission has always stood by the 'foolproof nature' of its machines. The ECI had reiterated that the EVMs used by it are manufactured by Bharat Electronics Limited (BEL) and Electronics Corporation of India Limited (ECIL), both state-owned, under "very strict" supervisory and security conditions.

This is not the first instance that the opposition Congress has alleged institutional bias in favour of the BJP in these most recent election cycles. The party had urged the ECI to cancel the poll held in Tamulpur assembly constituency of Assam after Bodoland People's Front candidate switched sides to the BJP ahead of voting. A delegation of Congress leaders led by senior party leader and former Law minister Ashwani Kumar met the EC and handed over a memorandum to it seeking cancellation of the poll. The party delegation argued that it was incumbent on the EC to ensure the purity of the electoral process and free and fair polls, after BPF candidate Basumataray defected to the BJP.

Rahul had alleged that a "wholesale capture" of India's institutional framework by the ruling dispensation has changed the paradigm in which opposition parties operate post-2014 as the institutions that are supposed to support a fair political fight do not do so anymore. In a conversation with Harvard University professor and former US Secretary of State Nicholas Burns, Gandhi said in order to fight elections, there is a need for institutional structures, protection by the judicial system, a reasonably free media, financial parity and a set of institutional structures that allow his party to operate as a political party, but all this is not there.

"In Assam, the gentleman who is running our campaign [for the Assembly polls] has been sending me videos of BJP candidates running around with voting machines in their cars," the former Congress chief said. "He is screaming at the top his voice saying look, I have got a really serious problem here. But there is nothing going on in the national media," he added. There is a "wholesale capture" of the country's institutional framework, Gandhi alleged. He claimed that there is absolute financial and media dominance by the ruling BJP. "It is not just the Congress, the BSP is not winning an election, the SP is not winning an election, the NCP is not winning an election. To fight elections, I need institutional structures, I need a judicial system that protects me, I need a media that is reasonably free, I need financial parity, I need a set of institutional structures that allow me to operate as a political party. I do not have them," Gandhi said.