She was addressing an election rally in poll-bound Assam 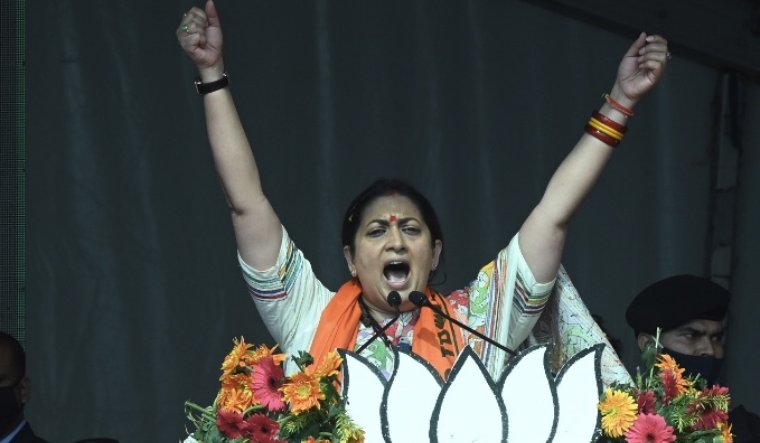 Apparently referring to Congress leaders Rahul Gandhi and Priyanka Gandhi Vadra, Union minister Smriti Irani, on Tuesday, alleged that they "do not know the Assamese culture" and pursue politics only for "the survival of their family".

Irani who defeated Rahul Gandhi from the Amethi constituency in Uttar Pradesh in the 2019 Lok Sabha elections, however, did not name the siblings.

"A few days ago, two members of the Gandhi family visited Assam. They don't know the Assamese culture and do politics only for the survival of their family," she said while addressing election rallies at Borbhag in Nalbari district and Gauripur in Dhubri district.

The Union minister for textiles and women and child development appealed to people to bring the saffron party back to power in the state for its development.

The senior BJP leader also accused the Congress of committing a sin by not fulfilling the promises that it had made during earlier elections in Assam.

The Congress was in power in Assam for three consecutive terms between 2001 and 2016 and the late Tarun Gogoi was the chief minister during that period.

Irani claimed that Prime Minister Narendra Modi has launched a series of schemes that are directly benefiting people who were earlier deprived of welfare programmes.

She alleged that the Congress, when it was in power at the Centre, did not even send funds allotted to Assam for its development.

The BJP leader termed the Badruddin Ajmal-led All India United Democratic Front (AIUDF), an alliance partner of the Congress, as a communal party.

"Don't spread communal hatred among people and create a fight among brothers. The Assamese people will vote for development and welfare of their families," she said.

The Congress and the AIUDF are providing support to each other, Irani claimed and asked, "How will they support you (people)?"

Later, addressing a press conference in Guwahati, Irani alleged that both the opposition are trying to lead people away from the politics of development being practised by the BJP.

"It is the compulsion of the Congress to join hands with the AIUDF to be alive. The party does not have the courage of its stalwart Tarun Gogoi not to form an alliance with the Badruddin Ajmal-led party," she said.

The first phase of the Assam assembly election was held on March 27. The state will have polling in two more phases on April 1 and 6.