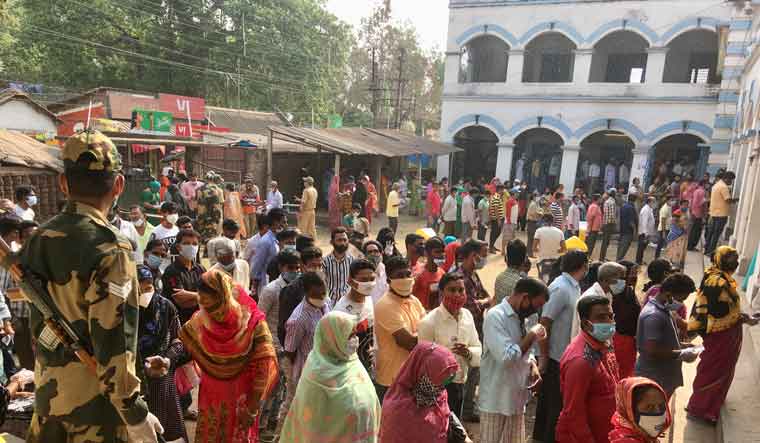 As the first phase of polling progresses in West Bengal, both the TMC and the BJP have accused each other of malpractices and will meet the Election Commission on Saturday. A 10-member Trinamool Parliamentary delegation led by Sudip Bandyopadhyay, leader Lok Sabha and Derek O'Brien, leader Rajya Sabha to meet Election Commission in Kolkata at 12 noon on Saturday. The BJP delegation led by National General Secretary Kailash Vijayvargiya will meet the West Bengal Election chief at 2pm.

The two main parties at war have raised allegations of election rigging against each other. TMC has alleged EVM tampering in Kashipur assembly constituency, saying that on pressing the TMC button, the votes are going to the BJP. It has also accused the BJP of threatening those not voting for the party.

The BJP also fielded similar allegations against the ruling party. Nandigram BJP candidate Suvendu Adhikari has written to the Election Commission, seeking suspension of Haldia Addl SP Partha Ghosh, Haldia SDPO Barunbaidya and some other officers of Nandigram Police Station "for helping TMC members in carrying out malpractices, irregularities during polls". "We approached the EC that there should be free and fair polls. People will choose whom they want. The TMC is scared. We've given the name of one Alauddin to EC, he creates disturbance there," said Soumendu Adhikari, BJP leader and brother of Suvendu Adhikari.

Meanwhile, Assam and West Bengal recorded a voter turnout of 24.48 and 24.61 per cent respectively till 11 am on Saturday. Polling began at 7 am for the 30 seats in the first phase of the assembly elections in West Bengal in which 191 candidates are in fray.