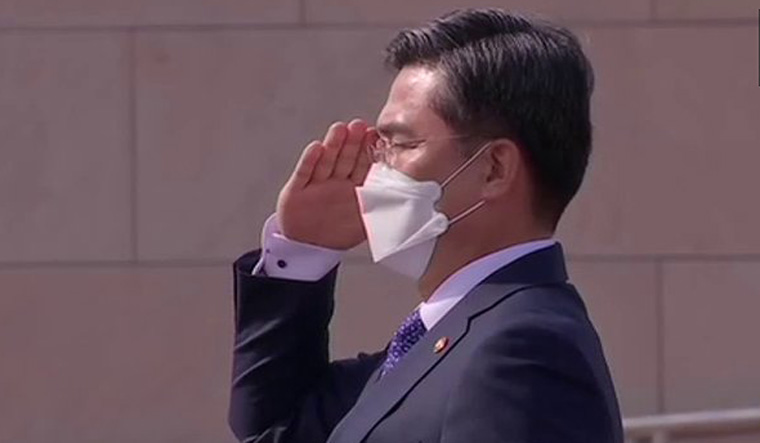 South Korean Defence Minister Suh Wook, on Friday, held bilateral talks on defence cooperation with his Indian counterpart Rajnath Singh. Sun Wook is on a three-day visit to New Delhi to bolster military cooperation between the two countries. Both leaders reaffirmed their support to multilateral initiatives to promote lasting peace and stability in the region and beyond.

The defence and security engagements between India and Republic of Korea (RoK) have grown exponentially over the past few years. The latest round of talks explored new domains of bilateral defence cooperation and avenues to strengthen the long-standing bilateral defence partnership.

Wook will also visit 50 Para Brigade and 60 Para Field Hospital in Agra to offer tribute to the heroes of Korean war.

Both sides have also agreed to work on a roadmap for defence manufacturing in India. Indian private sector company Larsen and Toubro (L&T) had signed a transfer of technology contract with South Korean company Hanwha Corporation to deliver K9 Vajra self-propelled howitzer for the Indian Army. Till date, the Army has received 100 such artillery guns.

"Rajnath Singh and Suh Wook acknowledged that the bilateral defence cooperation has broadened significantly in scale and scope across Tri-Service as well as agencies dealing with defence technology and industry," according to a statement issued by the ministry of defence. Both the countries have also found common ground on several multilateral fora and engagements, the statement read.

The ministers exchanged views on the impact of COVID-19 pandemic on the defence and security engagements as well as best practices followed by the armed forces of both nations. Rajnath Singh lauded stellar contribution of RoK in the pandemic mitigation efforts.

"They reaffirmed their support to multilateral initiatives to promote lasting peace and stability in the region and beyond. The bilateral relations between both the countries are set to grow further and the meeting between them will give it the necessary impetus to take it to the next level," an MoD official said.

The ministers also expressed satisfaction over the commitment exhibited by different agencies of both countries to sustain structured annual dialogues at various levels of leadership through virtual means when travel and physical engagements became increasingly challenging during the ongoing pandemic. This has kept up the momentum of bilateral defence engagements. The armed forces of both countries hope to approach 2021 with renewed confidence, the MoD statement read.

Earlier, Rajnath Singh and Suh Wook jointly inaugurated the India-Korea Friendship Park in a ceremony to mark the occasion at Delhi Cantonment. The park is a symbol of close relations between both the countries and acknowledges the contribution of the Indian Army’s Medical Mission during the Korean War. The presence of distinguished guests from the Korean War Veterans Association during the inauguration ceremony was an acknowledgement of the event. Both the ministers planted a sapling each to mark the momentous occasion.