Siren sounded across MP for awareness on COVID-19; Kamal Nath calls it theatrics

CM Chouhan made social distancing marks himself in old city 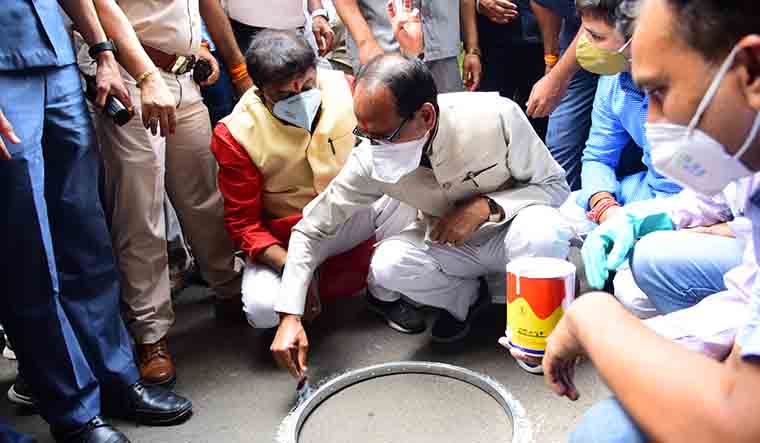 Siren was sounded across the state for two minutes at 11am on Tuesday to urge people to take oath to follow COVID-19 prevention protocols. However, the initiative evoked mixed response despite active involvement of politicians and government officials including police to make it successful.

Chief Minister Shivraj Singh Chouhan himself participated in the initiative at Peer Gate in old city where he launched the 'my mask-my safety’ campaign, drew social distancing marks in front of the shops and distributed face masks. Interestingly, the event also coincided with completion of one year of BJP government in the state.

Ex-chief minister Kamal Nath, meanwhile, called both the siren initiative and celebrations of one-year rule theatrics and added that the BJP finds ways to divert attention, but people are now tired of such dramatics.

In Bhopal, traffic was halted by police in some places to ensure that people stopped to take the oath, leading to traffic jams later. Traffic continued in normal way in most parts of state when the siren was sounded, including in Indore, which is the worst hit by new wave of COVID-19 in the state. Social distancing norms were not followed in a formal event to launch 'my mask-my safety' initiative, sources said.

The chief minister, speaking at Peer Gate event, said that the government was not intent on lockdown and wanted people to be able to continue to earn livelihood and run businesses. But, for this, he said, everyone had to follow protocols, save themselves and others. He insisted on wearing masks, maintaining physical distancing and using soap or sanitiser to clean hands regularly.

He said that negligence could be costly and therefore, social organisations and religious leaders should also support the 'my mask-my safety’ initiative and encourage people to follow protocols. “Government alone cannot ensure prevention of spread of infection. People have to support the cause actively,” he said.

Siren will sound again across the state at 7pm on Tuesday.

Meanwhile, speaking after paying homage to martyrs Bhagat Singh, Sukhdev and Rajguru, who were hanged on this day 90 years ago, ex-chief minister Kamal Nath said sounding of sirens, clapping were just theatrics and dramatics, but people are now tired of it. “People are now very sensible, and they know that such theatrics will not stop the infection or drive away COVID-19 infection. Only wearing of masks and social distancing can ensure this,” Nath said.

He called the celebrations of one year of BJP rule in state, too, as theatrics, adding that the BJP is always trying to divert attention of people from real issues by such events and actions.