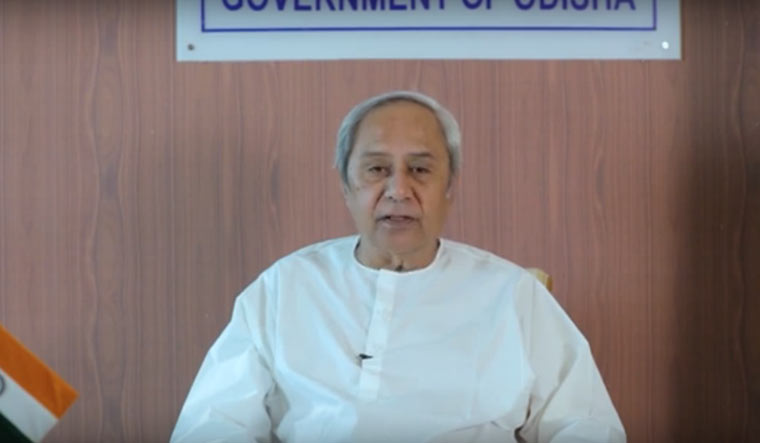 As proceedings of the Odisha assembly remained paralysed for the sixth consecutive day on Thursday, focus shifted to Chief Minister Naveen Patnaik who greeted protesting BJP lawmakers at his residence and talked to them on the contentious paddy procurement issue.

The state also witnessed a unique scene when Patnaik himself came down to meet the saffron party lawmakers staging dharna in front of Naveen Niwas in Bhubaneswar.

After the house was adjourned till 4pm due to a din by members of all the three parties— the BJD, Congress and the BJP—saffron party members marched towards Lok Sava Bhawan to meet the chief minister.

Not finding Patnaik at his office, the agitating BJP members walked three km, braving scorching sun from the assembly to Naveen Niwas, the residence of the chief minister.

"We are going to search the chief minister as he is not seen in the assembly even as the proceedings are suspended due to pandemonium over paddy procurement issue.

"As leader of the house, it is responsibility of the chief minister to resolve the issue, said Leader of Opposition P.K. Naik of the BJP.

After reaching CM's residence, the BJP lawmakers staged dharna in front of its main gate as it was closed.

"We sat on dharna and refused to go inside as the main gate was closed and one of the ministers said that BJP members' sins will be washed away if they visit Naveen Niwas. This is insulting," Naik said.

However, the agitators finally entered into the Naveen Niwas after Patnaik himself came to the main gate and invited them to his premises.

The BJP members had a discussion for a few minutes with Patnaik and returned with hope of resolving the issue.

The opposition BJP and Congress MLAs have been making allegations that the paddy produced by farmer is not being procured at the different state-run mandis due to government apathy.

BJP lawmaker from Deogarh Subash Panigrahi made a suicide bid by attempting to drink sanitiser in the house on March 12 as part of the protest.

After the discussion, Naik said, "We would have returned, had the CM not come out to invite us. However, we had a comprehensive discussion with the CM inside his residence on farmers issues."

Asked about BJD's demand for apology by Panigrahi, who made a suicide bid inside the assembly, Naik said, "Nothing of that sort was discussed in the meeting. The CM should apologise as a legislator of his state attempted suicide over famers issue."

"The chief minister has given assurances that the speaker would convene an all party meeting to discuss the paddy procurement issues," BJPs deputy leader in assembly B C Sethi told reporters after the meeting.

Sethi said the BJP members are happy as they could find the chief minister, who did not come to the assembly even though proceedings were paralysed.

Senior BJD leader and Parliamentary Affairs Minister B.K. Arukha said, "The BJP delegation had gone to meet the CM and the discussions were held in the most cordial manner. We hope the Odisha assembly will now function normally."

"The adjournment of the house for the sixth consecutive day is not a good sign for democracy. We (MLAs) should all ask ourselves if it is right.

"If we don't get the answer then we don't qualify to be public representatives," said senior BJD MLA S R Patnaik.

The stalemate in the assembly entered sixth day Thursday as the opposition members started agitation inside the well while the treasury bench MLAs shouted slogans demanding apology from BJP MLA Panigrahi while standing in their respective seats.

Following the ruckus, Speaker S.N. Patro adjourned the house thrice till 4pm. When the house reassembled, speaker again adjourned the proceeding several times for holding the all party meeting.

When the house was adjourned, all Congress MLAs sat on a dharna near the statue of Mahatma Gandhi in the assembly premises as a mark of protest over alleged mandi mismanagement.

Earlier, BJP's Mohan Majhi had issued whip asking all party MLAs to remain present in the house on Thursday.

The saffron party, which secured 22 seats in the 2019 polls for 147-member Odisha assembly, has emerged as the main challenger to Biju Janata Dal ruling the state since 2000.

The Congress has nine members in the Odisha house presently.