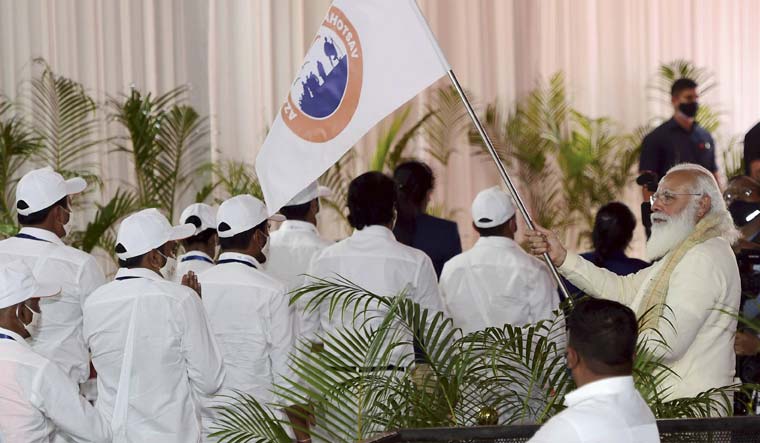 Prime Minister Narendra Modi on Friday exhorted people from the fields of drama, theatre, film industry and digital entertainment platforms to bring out stories on the freedom struggle of India.

He was kick-starting the 75-week-long Azadi Ka Amrit Mahotsav nationwide celebrations to mark 75 years of India’s Independence. The celebrations that have begun 75 weeks before August 15, 2022, will continue till August 15, 2023. He also unveiled a website of the Mahotsav.

Speaking from the premises of the Sabarmati Ashram, founded by Mahatma Gandhi on the banks of river Sabarmati in Ahmedabad, Modi said that there were so many stories in the country’s freedom struggle.

To mark the occasion, he flagged off Dandi March, which had 81 people. The march will end in Dandi, Navsari district, next month. Gandhi had taken out the Dandi march on the same date in 1930 against the British Raj's Salt Law. Salt, he said, is never compared with money but means honesty, trust and loyalty.

The prime minister said that India’s story is of self-reliance. He said that this could be seen during COVID-19 times. Making a mention that vaccines made in India are being exported for the benefit of other countries, Modi said that “we (read India) have not given pain to anyone, but are trying to ease the pain”.

Modi got emotional and stopped speaking for a few seconds while quoting from the Bhagwad Gita. Quoting from the holy scripture, he said that the one who stands firm in good and bad times gets the nectar.

The prime minister said that the ups and downs of the freedom movement will teach today’s generations lessons of life. The Amrit Mahotsav, he said, is about the nectar of energy, inspirations, thoughts and pledges.

The ideas, achievements, actions and resolves at 75 years of the country’s freedom will inspire India to move forward, he pointed out.

He also asked people and institutions to form groups of 75 and organise programmes in the months to come. He asked the law college students to come up with 75 instances from India’s freedom struggle that show how the freedom fighters were defended by the lawyers.

Gujarat Chief Minister Vijay Rupani, Gujarat BJP president C.R. Patil and Kartikeya Sarabhai of the Sabarmati Ashram were among those who were present on the occasion.

The city, especially the route from which the Dandi March is to pass from, was spruced up before the PM’s arrival.

Meanwhile, the opposition Congress was denied permission to take out a tractor yatra in support of the farmers. Gujarat Congress president Amit Chavda took to social media and said that permission was denied. He alleged that police deflating tractor tyres was indicative of autocracy of “Godse’s followers”.