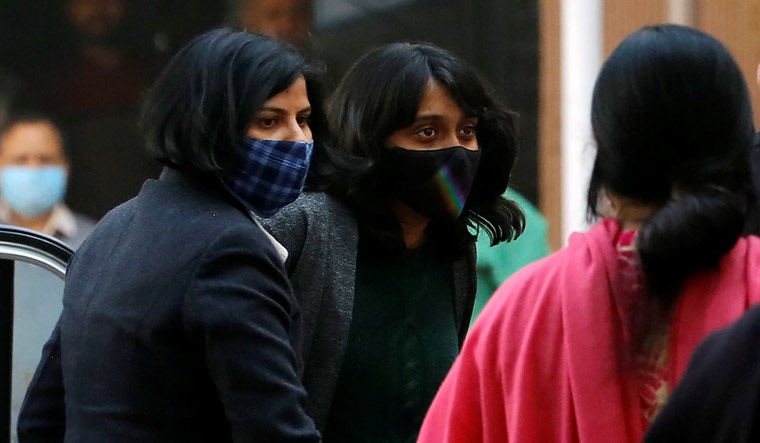 Disha Ravi arrives at a court in New Delh | Reuters

A Delhi Court on Tuesday granted bail to 22-year old climate activist Disha Ravi, who was arrested by the Delhi police from her Bengaluru residence on February 13 in the farmers protest 'toolkit' case. Allowing the bail plea of Ravi, additional session judge Dharmender Rana of the session court of Patiala House court granted her bail on furnishing a bail bond on two sureties of Rs 1 lakh each.

The Delhi court had, on Saturday, reserved for February 23 its order on her bail plea in the toolkit case after police alleged that she was part of a plan to instigate violence in India and had deleted "evidence" like emails. On Monday, Ravi was sent to single-day police custody (PC) to be confronted with co-accused in the case.

The Delhi Police, probing the "toolkit Google doc" shared by climate activist Greta Thunberg, had arrested Bengaluru-based activist Disha Ravi. Police had alleged that the "toolkit" was part of a global conspiracy to create unrest and trigger violence in India in the garb of the farmers' protest against the agri laws.

Hearing the case on Saturday, Additional Sessions Judge Dharmender Rana had posed some scathing questions to the probe agency during the hearing on Ravi's plea, asking it if it was only acting on "surmises, inferences, and conjectures" and questioned how the toolkit was connected to the violence during the farmers' march.