The agency has named 247 people as accused in the case 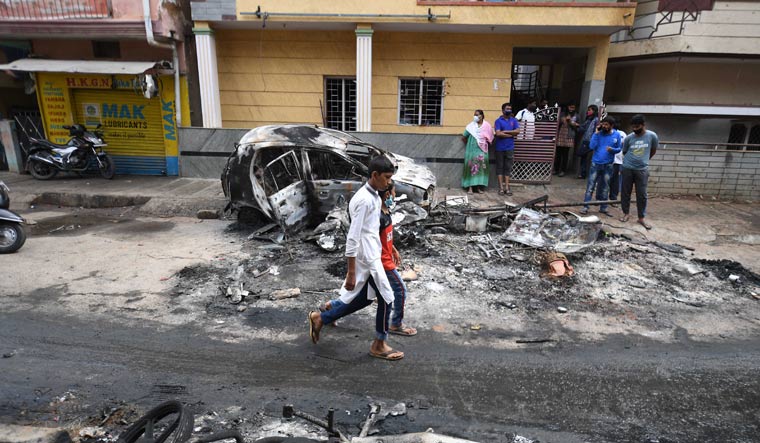 The violence in Bengaluru on August   12 last year in which Dalit Congress MLA R Akhanda Srinivasa Murthy's house and two police stations were torched was a larger conspiracy by the Social Democratic Party of India to create communal disharmony in the country,the NIA said in its charge sheet filed recently in a special court here.

The National Investigation Agency took up the investigation after a person moved the Karnataka High Court demanding a probe by the agency.

The agency has named 247 people as accused in the case, according to NIA sources.

While the immediate cause of violence in which more than 4,000 people from minority community went on rampage was allegedly a social media post by Pulakeshinagar MLA R Akhanda Srinivasa Murthy's nephew Naveen, the NIA charge sheet said the SDPI cadres provoked him with derogatory message to insult Hindu Gods in a social media post and tagged him along.

"The SDPI in Bengaluru was unhappy with the decisions of the Central government on certain matters which are repeal of Article 370,  issue of CAA/NRC, Supreme Court verdict on Babri Masjid case, Triple Talaq etc."

"They were waiting for an opportunity to create communal disharmony and thereby create unrest in the country," the charge sheet read.

"In furtherance to the conspiracy, they decided to post some derogatory message to insult and provoke Hindu Gods and the Hindu community through Fairoz Pasha's Facebook account," the NIA said.

It added that the conspirators intentionally selected August 11, 2020 because it was Krishna Janmashtami, an auspicious day for Hindus.

The agency said SDPI cadres were well prepared to respond to any situation and to execute their plans for a violent attack.  Accordingly, on August 11 afternoon, Fairoz Pasha  posted a video and audio clip, it said.

The comments in English made blasphemous and utterly derogatory comments on Hindu Gods and Goddesses,the charge sheet said.

Fairoz then tagged Naveen in the post.The post provoked Naveen to respond in a similar aggressive manner against the Prophet, the NIA stated.

After noticing Naveen's reply, Fairoz approached the Muslim community members and organisation leaders for lodging complaint against him and pressurise the police and government to act against Naveen, it said.

The post was widely circulated in WhatsApp and other social media accounts to hold him accountable for the violence.

In the night, Fairoz Pasha mobilised SDPI cadres and others to attack houses of Naveen and Murthy and also the KG Halli and DJ Halli police stations and police personnel, the charge sheet read.

Four people were killed in the violence including three in police firing and one due to abdominal injuries while many vehicles and shops were torched and damaged inside and outside the police stations.

The city police, which too is probing the case simultaneously, has accused the former Congress Mayor R Sampath Raj, who is a corporator of DJ Halli ward, of being part of the conspiracy to politically finish off his own party's MLA Akhanda Srinivasa Murthy.

Sampath remained absconding for many weeks before he was finally caught. He is now out on bail.