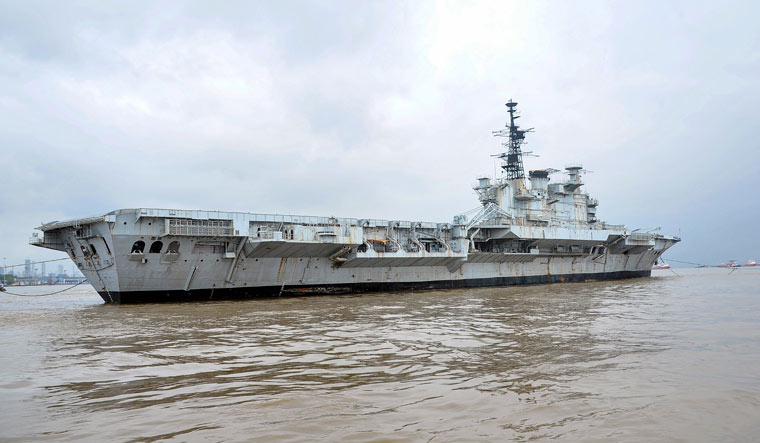 The Supreme Court Wednesday ordered status quo on dismantling India's decommissioned aircraft carrier 'Viraat' which was in service with the Indian Navy for nearly three decades.

A private firm has moved the apex court in a last ditch effort to save 'Viraat' which has been dismantled about 30 per cent by another company that had bought it through an auction.

The petitioner-firm has offered to pay Rs 100 crore for the ship so that it can be converted into a museum instead of being dismantled.

A bench headed by Chief Justice S A Bobde issued notice to the Centre and the firm dismantling the aircraft carrier on the plea.

In the meantime, parties are directed to maintain status quo with regard to dismantling/breaking of the subject-ship known as INS Viraat, as on date, the bench said in its order.

The centaur-class aircraft carrier, INS Viraat, was in service with the Indian Navy for 29 years before being decommissioned in March 2017.

During the hearing conducted through video-conferencing, the top court asked Rupali Sharma, petitioner in-person representing firm Envitech Marine Consultants Pvt Ltd, as to how much they are willing to pay for the passion of preserving national monument.

Sharma told the bench that they had approached the firm which bought Viraat at an auction for Rs 38.54 crore in July last year.

She said the company which bought Viraat' has sought Rs 100 crore for the ship from her firm and an No Objection Certificate (NOC) from the Centre for selling it.

The bench said it is issuing notice and directing for status quo on further dismantling of the ship.

Viraat had reached the Alang ship breaking yard from Mumbai in September last year and the dismantling process was going on.

Shree Ram Group at Alang in Bhavnagar district of Gujarat has bought Viraat at an auction in July last year for Rs 38.54 crore and it began the dismantling process in December last year.

The Centre had in July 2019 informed the Parliament that the decision to scrap Viraat was taken after due consultation with the Indian Navy.