Digvijaya, other leaders arrested as police stop rally from moving to Raj Bhavan 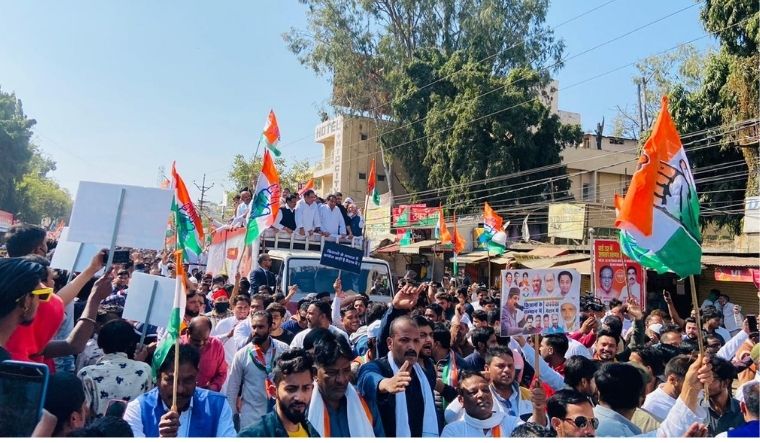 The Congress rally in Madhya Pradesh

Cane-charge, tear gas and water cannons were used to stop a Congress rally moving to gherao the Raj Bhavan (governor’s house) in Bhopal in support of farmers’ demands to repeal new farm laws on Saturday.

Ex-chief minister and MP Congress Committee chief Kamal Nath condemned the police action at the behest of Shivraj Singh Chouhan government. “I strongly condemn the arrests, lathi charge, use of tear gas and water cannon on thousands of peacefully protesting farmers and Congress workers at the behest of Shivraj government. Several farmers, Congress workers, women and media friends were injured in the lathi charge. I pray for their quick recovery. Our struggle in support of the farmers will continue. We will not be suppressed and intimidated by such oppression,” Nath tweeted.

Meanwhile, reacting to the agitation, chief minister Shivraj Singh Chouhan called it a drama by the Congress that is bound by servitude to one family. He said the issue had nothing to do with MP and that Congress people resort to such acts for their own benefits. "It is about fight for posts like leader of opposition and state Congress chief. They keep fighting not only here, but also before madam (Sonia Gandhi)," he said.

Earlier, speaking at the rally, Nath reiterated that the new farm laws will lead to privatisation of agriculture and turn farmers into bonded labourers. He also said the laws will only benefit the corporate houses and added that the Congress was trying to create awareness on this issue in Madhya Pradesh and also supporting the protesting farmers on Delhi border.

Senior leaders like ex-ministers Sajjan Singh Verma, P.C. Sharma, Jitu Patwari and others participated in the agitation. The Congress wanted to submit a memorandum to the Raj Bhavan demanding acceptance of farmers’ demands on repeal of new laws.

Meanwhile on Friday night, the police also evicted the farmers sitting on dharna in front of the Agriculture Produce Market (Mandi) gate at Karond in support of the protesting farmers in Delhi. The sit-in was started on January 21 by Akhil Bharatiya Krantikari Kisan Sabha. The police also took away the tent and the sound system installed at the dharna site.