Amid liquor policy row, Uma Bharti calls for prohibition in all BJP-ruled states 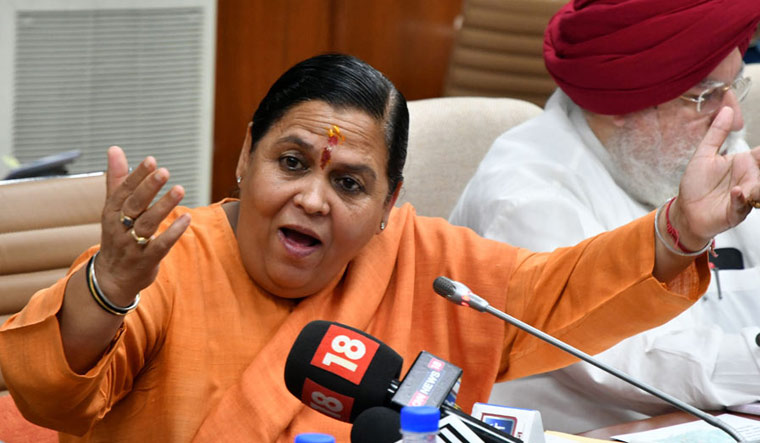 Amid the row over liquor policy in Madhya Pradesh, senior BJP leader and former chief minister Uma Bharti,on Thursday, called for a move towards total prohibition in all BJP-ruled states. She also sought a debate on the issue.

Noting that the government facilitating liquor sale is like a mother giving poison to the very kids she nurtures, Bharti issued a public appeal through Twitter to BJP chief J.P. Nadda for total prohibition. “It is surprising that despite liquor being a harbinger of death, the greed for some revenue and pressure of the liquor mafia do not allow a move towards prohibition,” the BJP leader said in a series of tweets.

A controversy erupted in Madhya Pradesh with Home Minister Narottam Mishra suggesting opening of more liquor shops in the rural areas of the state to control the flow of illegal and spurious liquor. He argued that illegal trade flourishes in the state because MP has fewer liquor shops per population compared to the neighbouring states.

The issue came up after the death of 26 persons in Morena due to consumption of spurious liquor. Earlier in October 2020, 16 people had died in Ujjain due to the same reason.

With the Congress launching an attack on the government over this issue, Chief Minister Shivraj Singh Chouhan, on Wednesday, said that no decision has yet been taken on any such move and that for ten years as chief minister, he never allowed increase in number of liquor shops and rather closed down certain shops.

Now, Uma Bharti, known for her candid views and public remarks, pushed for total prohibition. She said, “Prohibition is not a loss making proposition in anyway. The revenue loss due to prohibition could be made up elsewhere, but the incidents of rapes, including that of minors, murders and accidents under influence of liquor are a blemish on the society and the country.”

She added that thousands of crores is spent for maintaining law and order, and prohibition is an important step to maintain balance in the society and a debate could be initiated on this issue.

She had appreciated the statement of CM Chouhan that no decision has yet been taken on increasing the number of liquor shops. Bharti pointed out that there was a prohibition-like situation during COVID-19 induced lockdown and this makes it clear that there were deaths due to other causes, but not due to consumption of liquor.

However, recently, a number of deaths were reported in MP and UP due to consumption of spurious liquor, Bharti said, adding that even in cases of fatal road accidents, often the cause is driving under influence of liquor.

She went on to say that political parties are under pressure to win, but the BJP's victory in Bihar assembly polls proves that the votes of women went to (Bihar CM) Nitish Kumar due to his policy of total prohibition.