Will Congress's gamble with Badruddin Ajmal-led AIUDF pay off in Assam? 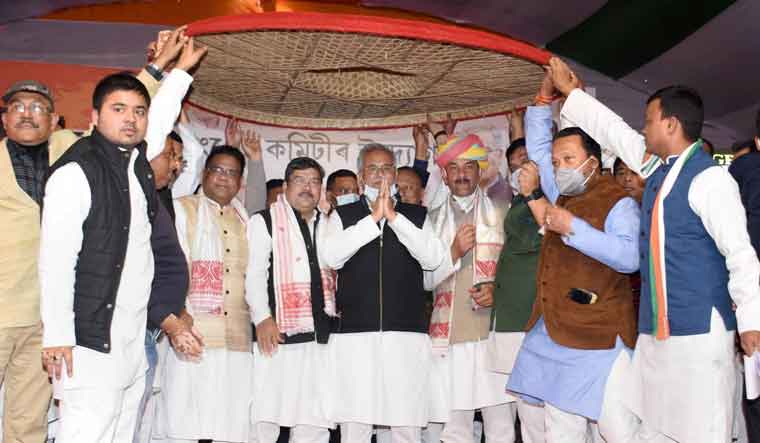 Faced with the stiff challenge of defeating the BJP in Assam, a state which was not until long ago its stronghold, the Congress has bitten the bullet to form an alliance with the All India United Democratic Front, hoping that it would enable a consolidation of the Muslim votes and braving fears that it might lead to an alienation of the indigenous voters.

As the Congress announced an alliance with the AIUDF, the Left parties and the Anchalik Gana Morcha in Guwahati on Tuesday, the highlight of the declaration was the decision to join hands with Badruddin Ajmal's party. While Ajmal had all along maintained that his party would enter the assembly elections in alliance with the Congress, the latter had held its cards close to its chest, saying the views of the party workers on the issue would be taken into account before deciding on whether to ally with AIUDF or not.

Former Assam Chief Minister Tarun Gogoi had openly spoken out in favour of an alliance with AIUDF, and PCC chief Ripun Bora also strongly favoured an alliance with the party. However, not all in the Assam Congress were convinced about the benefits of aligning with Ajmal. And this bloc felt empowered when the Congress, in alliance with the AIUDF, managed to win only one seat out of 40 in the recent Bodoland Territorial Council elections. Its MLA Ajanta Neog quit the party and joined the BJP, citing the Congress's plans to ally with the AIUDF as a reason for her quitting.

A section of the Congress believes that an alliance with the AIUDF, a party that is identified as espousing the cause of the non-Assamese Muslim voters in the state, would help consolidate the Muslim votebank. Muslims comprise 35 per cent of the state's population. Leaders in favour of the alliance argued that if there was no tie-up with the AIUDF, the Congress would lose minority votes to Ajmal.

The argument of those in the Congress opposed to having an alliance with the AIUDF was that it would lead to an alienation of the indigenous Assamese voters who view Ajmal as a leader of the Bengali-speaking Muslims and fear that their culture is under threat from outsiders.

Congress President Sonia Gandhi had recently announced a panel of observers for the state comprising Chhattisgarh Chief Minister Bhupesh Baghel, AICC General Secretary Mukul Wasnik and Bihar Congress leader Shakeel Ahmed Khan. The panel has held discussions with the state unit leaders prior to the announcement of the alliance.

It is argued that aligning with Anchalik Gana Morcha, a regional front headed by veteran journalist and Rajya Sabha member Ajit Kumar Bhuyan, would act as a balancing factor vis-a-vis allying with Ajmal. AGM was formed in June last year in the backdrop of the public outrage in Asasm over the Citizenship Amendment Act, which was viewed by the people of the state as giving a backdoor entry to non-Assamese denizens to be recognised as residents. Six regional outfits had come together to form a common front with the aim of upholding regional sentiments.

In the previous state elections in 2016, the Congress was reduced to 16 seats in the 126-member Assembly. It had then contested the elections alone. The party ruled the state for three consecutive terms from 2002 to 2016. It won 79 seats in 2011.