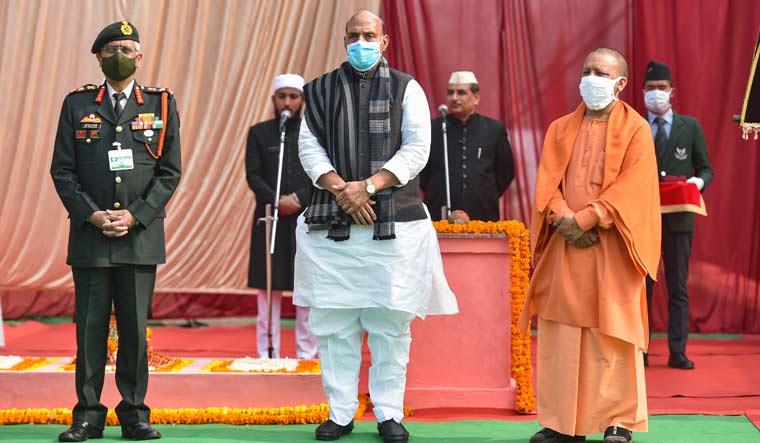 Defence Minister Rajnath Singh on Saturday said the Indian Army has boosted the morale of the country and also enabled the people to hold their heads high during the border standoff with China.

The military face-off had erupted on May 5 following violent clashes between the Indian Army and the PLA in the Pangong lake area.

He was speaking at the 'bhoomipujan' and foundation stone laying ceremony of the new Command Hospital in Lucknow.

The new building of the hospital is spread over 40 acres. The estimated project cost is Rs 425 crore. The building will have six blocks of four wings. These will vary in height from 3 to 9 storeys. All blocks are to be interconnected with skyways independent of the main patient activity areas. The complex will also have parking space for 750 cars. Vertical circulation will be maintained by a large number of elevators and ramps. It will house state-of-art facilities with all specialties and subspecialties, including cardiology with a modern interventional catheterisation lab, modular operation theatres with one hybrid operation theatre, state-of-art nephrology and dialysis centre, reconstructive surgery and crisis wards and composite oncology centre.

The hospital at Lucknow was raised in 1859 and designated as Command Hospital (Central Command) in 1967. The new building was approved by the Chief of the Army Staff in 2018.

One remarkable aspect of the new building is that no trees have been cut on the land it is to come up on. Instead they were all replanted—a point noted and appreciated by Singh in his speech.

Singh congratulated the nation for the ongoing ‘Swarnim Vijay Varsh’ celebrations which mark the 50 years of India’s victory in the 1971 Indo-Pak war. “The courage and valour of the defence forces in 1971 was a source of immense pride for the whole country,” he said.

The minister also touched on the start of the COVID-19 vaccination drive remarking that not only would everyone in the country get vaccine, the country would also provide vaccines for other nations in the spirit of ‘Vasudaiva Kutumbakam’ (the philosophy of the whole world being a family).