"The members of the SC-appointed committee are not dependable," the farmers claimed 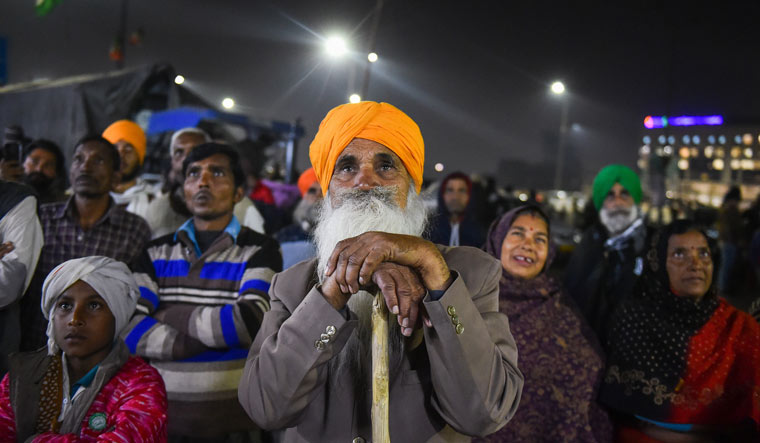 Farmers watch a documentary on the issue of farmers during their protest against the Centre's new farm laws, at Ghazipur border in New Delhi | PTI

Shortly after the Supreme Court's decision to set up a four-member panel to look into farmers' grievances, Punjab BJP president Ashwani Sharma appealed to agitating farmers to call off their protests. The Punjab BJP chief also welcomed the apex court's decision to form the panel to resolve the issues raised by farmers in the three agriculture laws. He hoped that all doubts of the farmers would be adequately addressed. In a statement, Sharma said the state farmers have contributed immensely to the nation's foodgrain stocks and the entire country is indebted to them for this.

Shortly after the apex court pronounced its order, the leaders of the farmer unions addressed a news conference at Singhu border in the national capital. "The members of the SC-appointed committee are not dependable as they have been writing on how agri laws are pro-farmer. We will continue our agitation," Balbeer Singh Rajewal said.

He said unions never demanded that the apex court form a committee to resolve the impasse, alleging the Central government is behind these developments. "We are against the committee in principle. It is the government's way to distract attention from the protest." The farmer leaders also claimed that the Supreme Court can repeal the farm laws suo motu(on its own).

Another farmer leader Darshan Singh said they will not appear before any committee, adding Parliament should discuss and resolve this issue. "We don't want any external committee," he added. However, the farmer leaders said they would attend the January 15 meeting with the government. "It is clear that the court is being misguided by various forces even in its constitution of a committee. These are people who are known for their support to the three Acts and have actively advocated for the same," said a statement issued by the All India Kisan Sangharsh Coordination Committee (AIKSCC).

BJP spokesperson Nalin Kohli said any order of the Supreme Court has to be complied with by all the concerned parties. Congress' chief spokesperson Randeep Surjewala said the party welcomes the Supreme Court's concern over the farm laws, but it has issues with the composition of the four-member committee. He told reporters that the members of the committee have already expressed their views in the past favouring the new laws and so the question arises in our minds how justice will be done to farmers by their hands.

The Supreme Court had stayed the implementation of the three controversial farm laws till further orders and decided to set up a four-member committee to resolve the impasse over them between the Centre and farmers' unions protesting at Delhi borders.

Farmers who have been camping at the Delhi borders for over a month are demanding a repeal of the farm laws and a legal guarantee to the minimum support price for crops.