Now, Godse ‘school’ in Gwalior to propagate his ideology 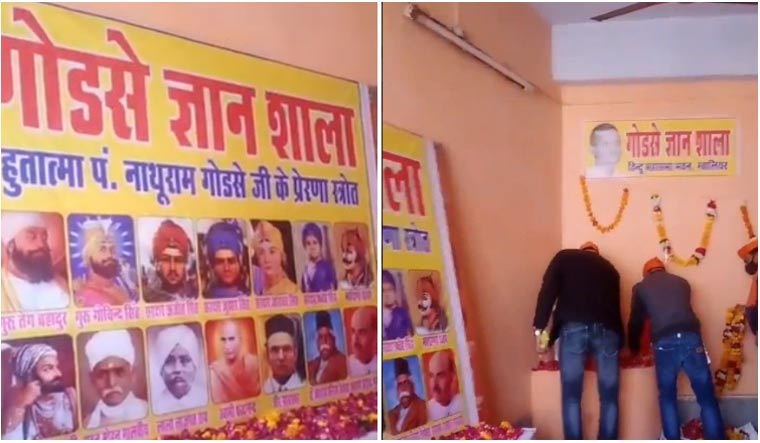 The ‘Gyanshala’, which will make available literature, including life-sketches of the two Hindu Mahasabha leaders (Godse and Apte) and the series of incidents and thought process that culminated in the assassination of Gandhi, opened at the Daulatganj office of the Mahasabha on Sunday.

The details on sustained opposition of the Mahasabha and its leaders to the partition and the final statement of Godse related to assassination of Gandhi in the court, which has been recently made public by court order, will also be made available to make youth aware about the ‘true history’ and to promote nationalism and patriotism in them, Hindu Mahasabha leader Jaiveer Bharadwaj told THE WEEK.

He said that Godse and Apte had acquired the weapon for Gandhi's killing in Gwalior, got training to use the firearm there and an important part of the plot was finalised in Gwalior and, therefore, the ‘Gyanshala’ is being opened there.

He also added that the partition came about due to personal ambition of Jawaharlal Nehru and Mohammad Ali Jinnah to become prime minister and Gandhi did nothing to stop it. It was to protest against this failure and to teach them a lesson that the oath to kill Gandhi and Jinnah was taken and despite public announcement of the intention, no action was taken to stop it.

Bharadwaj said that seminars and symposiums to propagate the ideologies behind and sequence of true events leading to partition and consequent killing of Gandhi will also be conducted by the Gyanshala. The activities, he said, will commence on January 23, the birth anniversary of Netaji Subhash Chandra Bose.

He said that unlike the Congress and BJP who always do things with political benefits in mind, the Mahasabha just wants the youth to know the true history of partition where five lakh Hindus were killed, raped and subjected to inhuman torture and 20 lakh got displaced.

“Godse was a true patriot and did what he did as he did not accept the partition, and we want this message to go out. We want to imbibe a feeling of true patriotism among youth through this activity,” he said.

On the occasion of opening, portraits of Godse, Apte and other leaders including Jan Sangh (precursor of BJP) leader Syama Prasad Mookerjee and RSS founder Keshav Baliram Hedgewar, were also unveiled and ‘aarti’ of the portraits was conducted amid chanting of hymns and sloganeering in praise of Godse.

Hindu Mahasabha leaders like Vinod Joshi, Kailash Narayan Sharma, Lal ji Sharma and Haridas Agrawal were present on the occasion. The Mahasabha had announced their plan to open the Gyanshala on Saturday and the police were alert.

Hindu Mahasabha in Gwalior has often courted controversy in the past. In 2017, also during the regime of the BJP government in the state, the Mahasabha had unveiled a statue of Godse but after strong opposition, the statue was seized. The organisation also celebrates the birth and death anniversary (called martyrdom day by them) of Godse in Gwalior.

Congress spokesman K.K. Mishra while talking to THE WEEK said that the BJP, RSS and the government should answer whether they support the initiative, especially as the portraits of Mookerjee and Hedgewar were used during the programme in Gwalior. BJP chief spokesman Deepak Vijayvargiya said that the incident was not in their knowledge, but if anyone was engaging in illegal activity, administration should initiate proper action against them.

Interestingly, in a programme in Bhopal, pro-tem speaker Rameshwar Sharma also said that India's partition was due to mistake of Gandhi. While attacking ex-CM Digvijaya Singh, Sharma said that Singh's name was misleading but he was more dangerous than Jinnah in behaviour and work. "Earlier, Jinnah divided the country. In 1947, Bapu's mistake caused partition of country. Now, he (Singh) wants similar division," Sharma said.