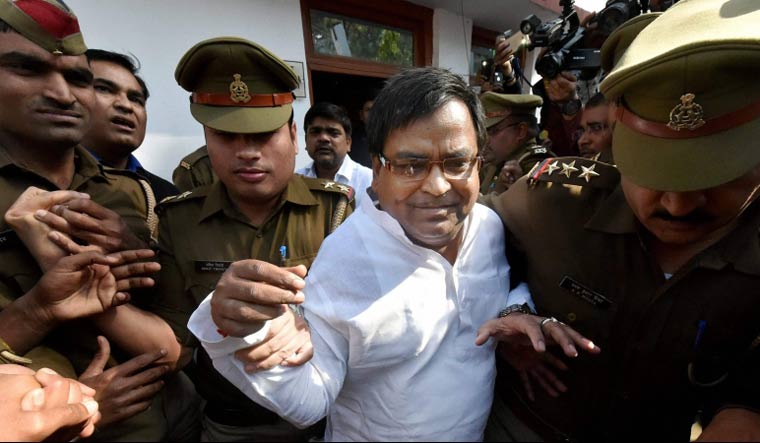 More than 100 registries of different properties spread across Lucknow, Kanpur, Amethi, Sitapur and other places have been unearthed by the Enforcement Directorate during its searches against former Uttar Pradesh cabinet minister Gayatri Prasad Prajapati and his associates in connection with the illegal mining scam.

On Thursday, the ED said allotment letters of four villas in Mumbai valued at Rs 2.5 crore each belonging to family members of the former minister were also seized.

Prajapati was a minister in the then Samajwadi Party government led by Akhilesh Yadav and has been charged with possessing alleged disproportionate assets. The anti-money laundering agency has also seized incriminating documents including computers and electronic records relating to transactions of immovable properties acquired by the former minister, his family and associated companies.

“In addition, 23 properties ranging between Rs 3 to 36 lakh, in the name of a single benami, whose residence has also been searched, have also been revealed during the search,” said the ED in a statement.

The ED initiated investigation against Prajapati and others on the basis of FIR registered by CBI into alleged irregularities in the renewal of sand mining leases in Fatehpur, UP, between 2012 and 2016 alleging that Prajapati, in collusion with other government officials and private persons, had got the mining leases renewed without following proper process of e-tendering and thereby aiding and abetting illegal mining in the district.

Investigation by ED further revealed that the cash deposits in the bank accounts of Prajapati's family members and companies were found to be non-commensurate with their income tax filings.

“It was revealed that during the period the accused remained minister in the UP government, his company rose exponentially in net worth which he could not explain satisfactorily during his examination,” said the agency.

Investigation also revealed that his family members had paid substantial tax on undisclosed income under the Income Declaration Scheme, 2016.

During investigation, it was revealed that the UP Vigilance had also registered a disproportionate assets case against Gayatri Prajapati on November 26.

Discreet inquiries conducted by ED against the benami holders allegedly revealed that they were daily wage earners from humble backgrounds incapable of owning or acquiring the properties revealed and confirmed during investigation.

The ED said that after the arrest of Gayatri Prajapati in March, 2017 in a rape case, his sons have clandestinely sold off some of the properties for personal gains and influencing key witnesses in the trial case against Gayatri Prajapati. Other than the property related documents, demonetised currency of Rs 11.5 lakh, new currency of Rs 1.42 lakh and stamp papers worth Rs 5 lakh have been seized.

Details of the properties whose registries found by ED during searches: