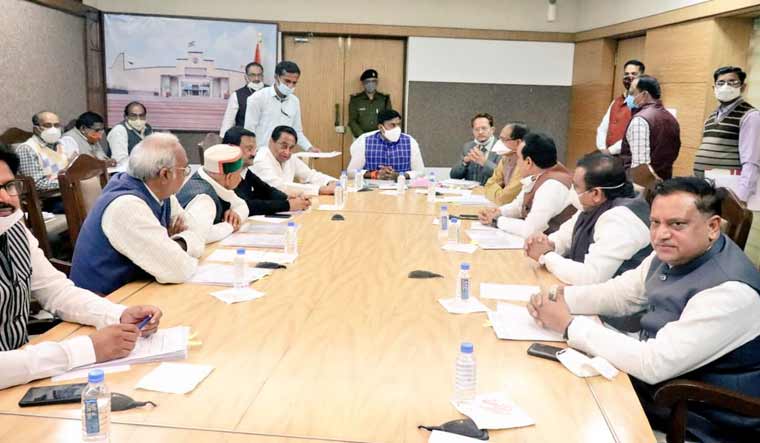 The Madhya Pradesh government is also likely to bring in the Religious Freedom law—commonly being referred to as the law against 'love jihad'—in the form of an ordinance along the lines of Uttar Pradesh, as the winter session of the state Assembly was deferred at the last moment due to a COVID-19 outbreak in the Assembly secretariat.

The BJP government was all set to table the MP Religious Freedom Bill, 2020 during the winter session proposed from December 28 to 30. However, the session was deferred on Sunday evening after five MLAs and as many as 61 officers and employees of the Assembly secretariat tested COVID-19 positive during the past three days.

An all-party meeting and attended by the Chief Minister Shivraj Singh Chouhan and leader of opposition Kamal Nath was held on Sunday evening, wherein it was unanimously decided that due to the COVID-19 situation the Assembly session should be deferred, protem speaker Rameshwar Sharma who chaired the meeting announced on the Twitter.

Home and parliamentary affairs minister Narottam Mishra told the media after the meeting that the decision to defer the Assembly session till the budget session (normally held in March) has been taken unanimously and further decisions will be taken by MLAs' committee as suggested by the leader of opposition.

Mishra also said that the important laws including the MP Religious Freedom law will be brought in as ordinances. MP is quite intent on the "love jihad" law and had made very stringent provisions against "conversions through force, allurement, fraud or marriage" in the bill that was approved by the state cabinet on Saturday.

Uttar Pradesh has also brought in the law against "love jihad" as an ordinance last month and already several cases have been registered under the law, though it has also been challenged in the court for 'anti-constitutional' provisions.

The proposed MP law also has provisions similar to the Uttar Pradesh law with additional provisions for property share to the "victims" (women converted for marriage sake and children born of such wedlocks).

Meanwhile, though the leader of opposition Kamal Nath agreed to the deferment of the session during the all-party meeting, he later told the media that any attempt to repress the voice of the opposition will not be tolerated. He said that all the decisions taken as per Assembly protocols and rules will be accepted and added that the opposition had demanded setting up of MLAs' committees to look into different issues in the current context.

Demo in support of protesting farmers

Meanwhile, the Congress has decided to continue with its proposed demonstration in support of farmers protesting against three farm laws to be held on December 28, despite deferment of the winter session of the state Assembly. December 28 is also Congress foundation day. The Congress MLAs had planned to reach the Assembly on its first day on tractors in show of support to the protesting farmers. Former MP Congress Committee chief Arun Yadav said that while the government had deferred the winter session as it is afraid of farmers' wrath, the proposed demonstration of the Congress will be held as planned.