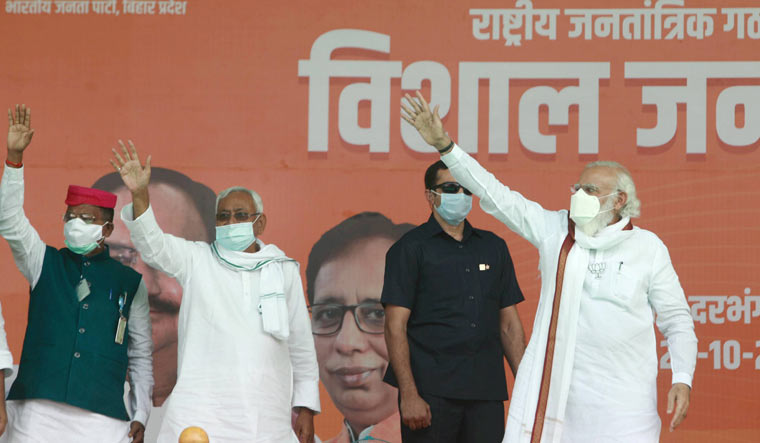 After six JD(U) MLAs switched over to the BJP in Arunachal, the Congress aimed a wry dig at Bihar Chief Minister Nitish Kumar. Congress leader in the Lok Sabha, Adhir Ranjan Chowdhury, warned the Janata Dal (United) president—whose party is in an alliance with the BJP in Bihar—against the BJP's "poaching skill" and asked him to keep in touch with opposition parties in the state as an "antidote to withstand the Arunachal Syndrome". In a tweet, Chowdhury said: "Dear @NitishKumar Ji, Beware of #BJP, they are well adept and highly skillful in poaching operation like the notorious wild animal poachers of North Eastern region. Before being torn into pieces and to be withered away by the same machination as you are now experiencing in #Arunachal Pradesh, @NitishKumar Ji, explore new ideas which may include keeping in touch with the opposition in Bihar as an antidote to withstand the #ArunachalSyndrome.”

In Arunachal, the JD(U), led by Bihar Chief Minister Nitish Kumar, won seven of the 15 seats it contested in the 2019 assembly elections, and emerged as the second largest party after the BJP, which had bagged 41 seats. Following the switchover, the BJP now has 48 MLAs in the 60-member House, while the JD(U) is left with only one. Congress and the National People's Party (NPP) have four members each.

The developments in Arunachal Pradesh had left tongues wagging as to whether it would elicit a response from the JD(U) in Bihar. The opposition RJD-Congress combine came out with statements asserting that the development in Arunachal Pradesh gave a hint of the shape of things to come in Bihar where the JD(U) has already ceased to be the senior partner in the coalition. "The BJP, by violating the coalition dharma, has sought to send out a clear message that it cares two hoots about Nitish Kumar who, on the other hand, is wary of even reacting", RJD national vice president Shivanand Tiwary said in his statement.

However, Nitish sought to downplay the same. "They [the MLAs] have gone their own way", Kumar said in response to queries from journalists about the split that came ahead of the JD(U)'s national executive and national council meetings scheduled this weekend.

The JD(U) has been contesting assembly polls in a number of states without having a truck with the BJP, insisting that its tie-up with the saffron party was "confined to Bihar". The party made an exception only in the Delhi assembly polls earlier this year which it fought in alliance with the BJP though the coalition suffered a humiliating defeat at the hands of Aam Aadmi Party.