After clash over Sushant case, Uddhav govt and BJP to spar over bullet train land 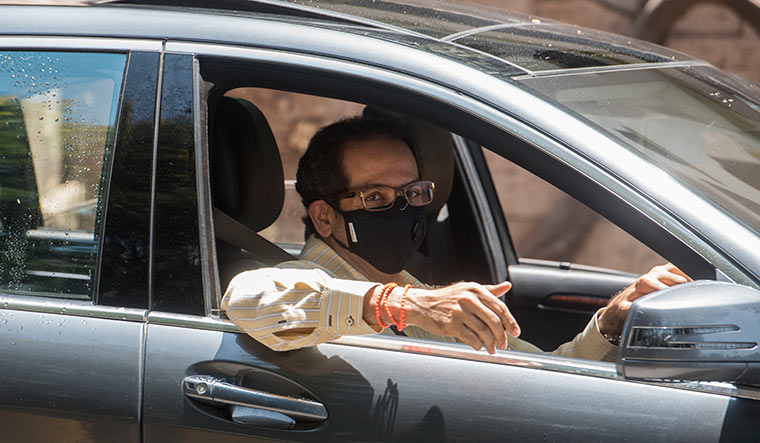 While coronavirus forced people to stay indoors, Maharashtra's Maha Vikas Aghadi combine of Shiv Sena, NCP and Congress was also busy keeping the BJP at bay on many issues as it battled the pandemic during the year.

Governor Bhagat Singh Koshyari and Uddhav Thackeray got into an acrimonious exchange over the reopening of religious places in the state.

In a letter with sarcastic overtones, Koshyari asked Uddhav Thackeray if he had turned 'secular' as he denied permission to reopen the religious places. Uddhav Thackeray responded, saying he did not need a Hindutva certificate from anyone.

"I am shocked and surprised to know that the letter of the governor was released to the media and also the kind of language used in the letter, which does not behove well for a person who holds a constitutional position," Pawar wrote to the prime minister.

While the Sena and NCP seemed to be making most of the unlikely post-poll alliance, which formed the government last year, the Congress, which finished fourth in the Assembly polls, found itself pushed to the corner.

According to a Congress leader, some in the party's state unit feel that had it sought the deputy chief minister's post, instead of the Assembly Speaker's post, the MVA regime may have looked like a true three-party government.

Ajit Pawar who returned to the MVA after forming a three-day government with BJP's Devendra Fadnavis last year, is someone Uddhav Thackeray relies heavily on for the latter's administrative acumen, a Sena leader said.

The MVA government did not get the 'honeymoon' period a newly-formed dispensation normally gets. After the full cabinet was formed on December 30 last year, the government got barely three months to settle down before the pandemic gripped the state.

The perception grew stronger that the 'Thackeray sarkar' was handling the pandemic well by setting up 'jumbo' field hospitals, a task force of medical experts to advise on treatment and audit of COVID-19 deaths; taking over 80 per cent beds in private hospitals and covering the state population under the Mahatma Phule health scheme. Then came the death of actor Sushant Singh Rajput in June this year.

The Thackeray government found itself in the cross-hairs of the BJP as attempts were made to implicate his son and state minister Aaditya Thackeray in the deaths of Rajput and celebrity media manager Disha Salian.

Mumbai Police said Rajput's death was a case of suicide but egged on by social media theories, the actor's family filed a complaint against the actor's girlfriend, Rhea Chakraborty, and her relatives, accusing her of stealing his money and driving him to end his life.

Actor Kangana Ranaut joined the anti-government campaign on social media by tweeting against Shiv Sena, Uddhav Thackeray and his son.

Without naming Kangana Ranaut, he said "those crying for justice" accused Mumbai Police of being useless. "Mumbai is PoK (Pakistan-occupied Kashmir), there are drug addicts everywhere—they are painting such picture," he said.

In what the BJP termed as retribution against critics of the state government, journalist Arnab Goswami was arrested in an abetment to suicide case, while the Sena-controlled Mumbai municipal corporation demolished Ranaut's alleged illegal construction in Bandra.

Even as some questioned the government's stability, the victory of Congress and NCP in the graduates and teachers constituencies in the Legislative Council polls brought cheer to the MVA partners, who contested the polls together.

The results boosted the morale of the government, which spent most of the year battling coronavirus and natural calamities like cyclone, floods and heavy rains.

The Maharashtra cabinet in December decided to list the Maratha community under the Economically Weaker Sections (EWS) category. The 10 per cent EWS quota is earmarked for those who are not covered under any social reservations.

The decision came after the implementation of the quota for the Maratha community under the SEBC (Socially and Economically Backward Class) category was stayed by the Supreme Court, and was challenged by the state government.

The Shiv Sena versus BJP slugfest over the location of the metro car shed for the Colaba-Bandra-SEEPZ line is set to get uglier, with the state government now looking at land meant for Prime Minister Narendra Modi’s pet bullet train project between Mumbai and Ahmedabad.

The MVA government faced flak for not extending the terms of three statutory development boards, which lapsed on April 30 this year.