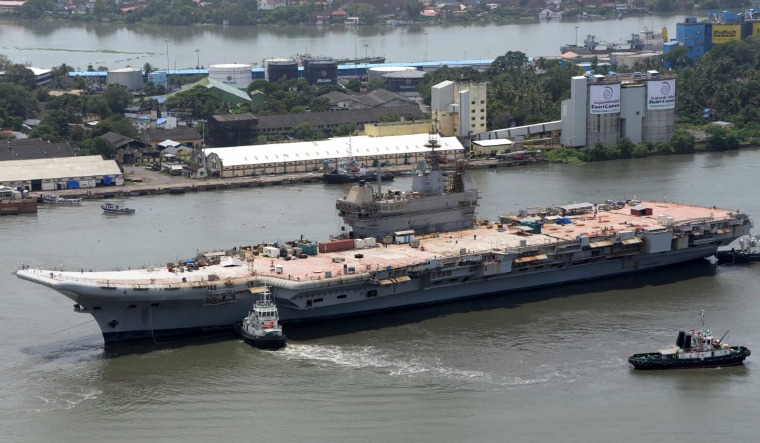 In a major development, the basin trials of the Indigenous Aircraft Carrier (IAC) were successfully conducted at Cochin Shipyard Limited (CSL) on Monday, marking entry into the final phase of the ambitious warship-building project.

Basin trial is testing of the ship’s machinery and equipment in floating conditions before the sea trials. With successful completion of basin trials, IAC has entered the final phase of the project, a Defence statement said. The sea trials are planned in first half of 2021. "With focused and committed efforts of Indian Navy and Cochin Shipyard Limited, it is only a matter of time that IAC, the Nations Dream, would be sailing the high seas bearing the National Tricolour," the statement said.

Despite the restrictions imposed by the lockdown due to COVID-19 pandemic, CSL and Indian Navy worked as a cohesive team to ensure timely completion of all essential tasks leading up to basin trials of aircraft carrier, the statement said.

"It is solely due to the astute planning and the implementation of necessary safety measure on ground by Navy and Shipyard that the work onboard aircraft carrier could progress unhindered even during the peak of pandemic," it said.

Onboard IAC, extensive trials of all four LM2500 gas turbines, main gearboxes, shafting and controllable pitch propellers, along with their integrated control systems, were carried out during these trials.

In addition, major auxiliary equipment and systems such as steering gear, air-conditioning plants, and deck machinery as well as entire internal communication equipment were also proved during the harbour trials phase, the statement said.

The IAC project is also a true example of Atmanirbhar Bharat with close to 75 per cent of the material and equipment onboard the IAC being indigenous, the statement said.

Further, over 50 Indian manufacturers have been directly involved in this project, which has provided significant employment opportunities for Indian citizens.

In addition, about 80-85 per cent of the project cost of approximately Rs 20,000 Crore has been ploughed back into the Indian economy, according to the statement.