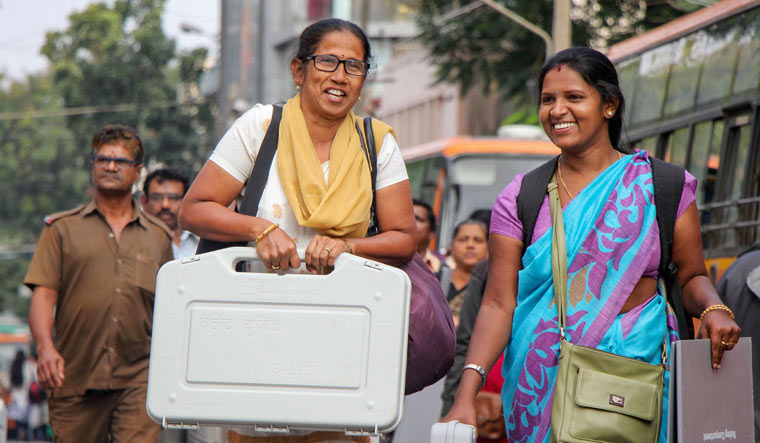 The elections to the gram panchayats in Karnataka will be held in two phases - December  22 and 27 and the counting will be held on December 30.

The State Election Commission (SEC) on Monday announced the calendar for the elections to be held across 5,762 out of the total 6,004 grampanchayats in the state.

"The election will be held across 5,762 grampanchayats for 92,121 seats in the state. While the remaining 242 GPs will not be going to polls as 162 GPs have not completed their term, 74 GPs have been either partially or fully merged with urban local bodies, and another six have litigations pending before the court. The Model Code of Conduct will come into effect immediately and will be in place till December 31, till 5 pm.

Said State Election Commissioner B. Basavaraju, "This is the first time, the gram panchayat polls are being held amid a pandemic. The state has around 2.97 crore GP voters and in view of the pandemic, the polls will be held in two phases in every district across 45,128 polling booths, limiting the number of voters in each booth to 1,000. While face mask, use of hand sanitisers and social distancing will be mandatory for all voters, the SEC will facilitate voting by COVID patients and suspects in the last hour in their respective polling booths."

The voting will be through ballot paper across the state except in Bidar district, where the electronic voting machine will be used.

A PIL was filed before the Karnataka High Court, questioning the postponement.

On November 13, the Karnataka high court directed the SEC to conduct the elections within three weeks.

"The Congress party had opposed the postponement of the grampanchayat polls as we wanted the power to lie in the hands of the people and not an administrator. We also want the BBMP polls to be held at the earliest. It is the government's responsibility to conduct the polls with adequate precautions against the Covid-19," said KPCC chief D.K. Shivakumar.