Won't talk to Khattar until he apologises for 'inflicting brutality' on farmers: Punjab CM 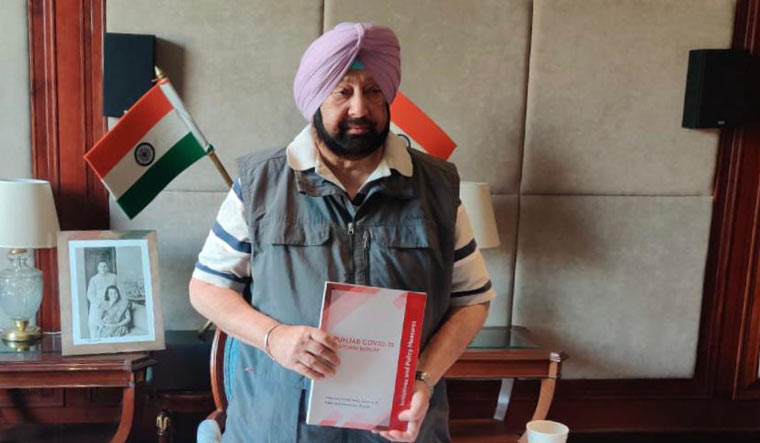 Punjab Chief Minister Amarinder Singh on Saturday said he will not speak to his Haryana counterpart Manohar Lal Khattar until he seeks an apology for "inflicting brutality" on farmers marching to Delhi.

The Punjab chief minister also junked the allegations that he did not speak to Khattar over the farmers' issue despite repeated attempts by the Haryana CM, according to a statement.

Khattar is lying that he tried calling me earlier and I did not respond. But now, after what he has done to my farmers, I will not speak to him even if he calls me 10 times. Unless he apologises and admits that he did wrong with Punjab's farmers, I will not forgive him, said Singh, seeking apology from the Haryana CM for "inflicting brutality" on farmers.

The Punjab CM's reaction has come after Khattar alleged on Saturday that despite wanting to talk to him over the issue, former did not respond even when telephone calls to his office were made for three days.

Claiming a conspiracy, Khattar told reporters in Gurgaon that officials in the Punjab Chief Minister's Office are giving directions to the protesting farmers from Punjab.

Earlier, Khattar had accused the Punjab CM of only tweeting and running away from talks with him on the issue.

Amarinder Singh said there is no way he would talk to Khattar again, neighbour or no neighbour, after Haryana's use of water cannons and teargas shells against farmers.

Singh said if he could talk to the prime minister and the Union home minister so many times on the farmers' issue, why would he have not taken calls from a neighbouring chief minister if he had truly called earlier.

Questioning Khattar's decision of not allowing farmers to go peacefully to the national capital, Amarinder Singh demanded to know who is Khattar to come in between. What business does he have interfering in this whole affair, the Punjab CM asked.

Amarinder Singh also slammed the Haryana CM for making baseless allegations that he is instigating farmers.

“I am a nationalist to the core. I run a border state and will never do anything to create a law and order problem of any kind,” he asserted.

“For 60 days, the farmers were blocking Punjab's railway tracks, causing more than Rs 43,000 crore in losses to the state, without any problem.”

“I will not take this nonsense from Khattar. Don't I have better things to do than to incite farmers,” he said.

Sometimes they say it's Khalistanis who're managing the protests and sometimes they accuse me of doing it. |Let them make up their minds, said Amarinder Singh.

The CM declared that no political party was involved in the farmers' protests, which were a spontaneous reaction of farmers who were fighting for their future, according to the release.

Lambasting Khattar's charges that farmers were creating law and order problem, the CM said the Punjabis are law-abiding citizens and it is Haryana which is damaging public property and blocking the highways to stop farmers.

Terming as ludicrous Khattar's claim that Haryana farmers are not part of the 'Delhi Chalo' agitation, Amarider Singh said Punjab's intelligence showed that as many as 40,000-50,000 farmers from the neighbouring state have joined the march to the national capital, which even the Centre's intelligence reports would have borne out.

He (Khattar) doesn't know what's happening in his own state and he's telling me what to do in my state, quipped Amarinder.

The Punjab CM said farmers had announced their decision to go to Delhi several days ago, even before lifting the rail blockade.

Farmers are angry over the farm laws, which seek to destroy a well-tried and successful 100-year-old system of mandis and arhtiyas (commission agents), he said.

Stating that nobody was stopping corporate houses from coming into the agricultural marketing system, the CM said they are even now procuring and running businesses in Punjab.

They can do this while continuing with the existing system, both can run in parallel, he added.

The CM said he also wanted the issue to be settled and the confrontation to end and will do what he can to help resolve the problem.

He was prepared to back any attempts by the Centre to end this imbroglio, he said, adding that the Centre has to talk to the farmers and find a solution.