The voting was held peacefully, barring a minor incident in Kulgam 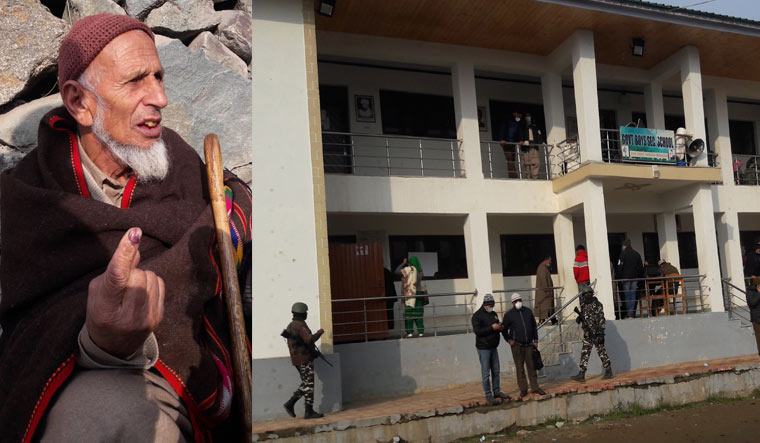 An impressive 51.76  per cent turnout was recorded in the first phase of the District Development Council (DDC) elections in Jammu and Kashmir.

State Election Commissioner K.K. Sharma said 3,62,766 voters out of the 7,00,842 electorate cast their vote in the first phase. The highest turnout of 74.62 per cent voting was witnessed in Jammu’s Udhampur district and the lowest of 6.70 per cent was recorded in Pulwama in south Kashmir.

The voting turnout in Kashmir region was recorded at 40.65 per cent while in Jammu, it was 64.2 per cent.

The voting was held peacefully, barring a minor incident in Kulgam.

For the first time, the west Pakistan refugees and others who were barred from participating in local polls in Jammu and Kashmir also cast their ballot.

The polling that began amid chill and tight security picked up after the temperature improved in the day.

The DDC polls are being held in the Union Territory for the first time after the Centre amended the J&K Panchayat Raj Act 1989 after the revocation of Article 370.

In the first phase, 296 candidates are competing for 43 seats.

Voter response was more than satisfactory at many places including  Fakeer Gujari, 20 km from Srinagar, where the polling station has been established in government boys secondary school.

Despite the biting cold weather, a good number of voters were present at the polling station to cast their ballot.

The DDC election has become a direct contest between the BJP and the People’s Alliance for Gupkar Declaration (PAGD).

The alliance seeks the restoration of Article 370 and statehood for Jammu and Kashmir.

The Congress which is a signatory to the Gupkar Declaration has not formally joined the alliance. The party, however, had a tacit understanding with the alliance .

The DDC polls is the first major exercise to kick start the political process in Jammu and Kashmir after the erstwhile state was stripped of its limited autonomy and statehood.

Gojri said he came out to vote for the development of his area.

“I have voted for an independent candidate this time,’’ he said. “If he wins our area will have more development like better roads and healthcare system.”

The DDC polls in the UT have become highly significant due to the decision of the PAGD to contest the polls.

A lot of independents are also contesting the polls which, observers believe, hold the key to assembly elections that are likely next year after the delimitation of assembly constituencies is completed in May.

Observers believe that the result of the DDC polls will be an important indicator whether the people of J&K are happy about the decisions that the BJP has taken on Jammu and Kashmir.

The BJP is mindful that the polls results will be seen as a referendum on its policies on J&K.

The party has lined up a battery of ministers and senior leaders to campaign in Jammu and Kashmir for its candidates.

The PADG leaders have alleged that their candidates are not being allowed campaign freely and many have been housed in government buildings on the pretext of security threat.