Dhankhar denies allegations he as 'ill-informed on law, face and constitution' 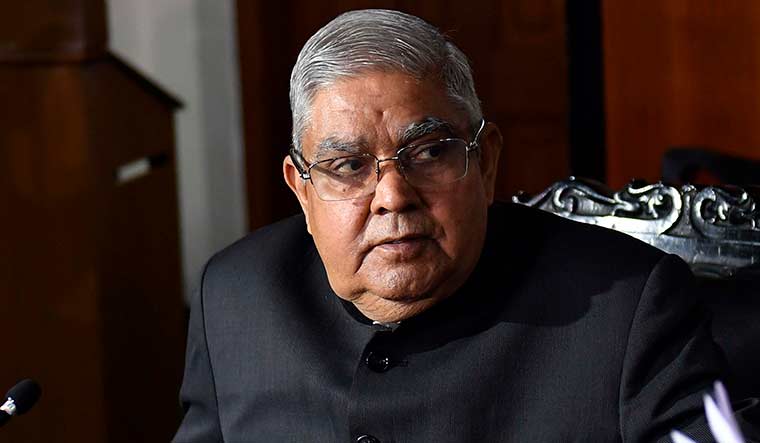 Kalyan Banerjee, an MP and legal adviser with the Mamata Banerjee government, on Thursday said that the governor can be prosecuted under sections 186 and 189 of the IPC. “I will advise the Kolkata police to start the process as no permission is required for this. The governor has secret links with BJP criminals and other criminals. He is targeting the chief minister and preventing investigation,” he alleged.

Banerjee was referring to the governor’s tweets on November 22, regarding the arrests of Govinda Agarwal and some chartered accountants.

Banerjee alleges that Agarwal was a declared offender based on the recovery of a huge amount of cash following demonetisation in 2016.

Dhankhar retaliated sharply to the accusation.

“My attention has been drawn to press release and conference by a ruling party leader. To the extent Governor role or actions are concerned, the reflections are wide off the mark, betraying ignorance of elementary constitutional and legal aspects and factually untenable,” Dhankhar said in a statement released by Raj Bhavan, Darjeeling, where he is currently stationed.

“A classic case of memory lapse of law and constitution. This is unfolding of a strategy to take diversionary route so that burning issues get to back burner. This shall not happen. It deserves no serious note except for being ill-informed on law, fact and constitution. In summation, it is part of ongoing vituperative campaign to cover up monumental lapses and constitutional indiscretions. These cannot be impactful. I cannot help if some can even not read and understand the tweet language. I rubbish any assertion made that indicates otherwise than my commitment for accountability and transparency,” the governor said.

It was not known why Banerjee sought the governor’s prosecution when Article 361 safeguards the governor of any state, as well as the president of India, from criminal proceedings during their tenures.

Dhankhar added, “The governance in the state is getting distanced from constitutional prescriptions and rule of law. The State of Human Rights Commission capsules it. As per its Chairman, who is retired Chief Justice of Calcutta High Court, the commission is ‘on ventilator’ for years now. [This] indeed a sad and worrisome spectacle.”

Dhankhar further came down heavily on the state government for its inaction against a top IPS officer of the state.

“There is no ground for the Government and that too for over a year now of not sharing with the Governor the inquiry details of Gyanwant (Singh), IPS, whose conduct was severely adjudged by the High Court,” he said.

The Calcutta High Court, according to Dhankhar, has found him “guilty of exceeding police powers conferred on...and thereby have acted ultra vires the Constitution.”

He added that the High Court had categorically recorded “finding that he invaded right to life without authority of law while discharging duty as public servants, it is declared that they have acted ultra vires and their acts impugned herein are unconstitutional.”

Ganwyant Singh is the Inspector General, law and order, of West Bengal. The governor has also raised the issue of alleged extra-constitutional appointments of two retired IPS officers, Surojit Karpurokaystha and Rina Mitra.

“Why state is not giving out obligations and duties of State Security Advisor Purkayastha and Principal Advisor Rina Mitra? Why hide their activities?” Dhankhar asked.