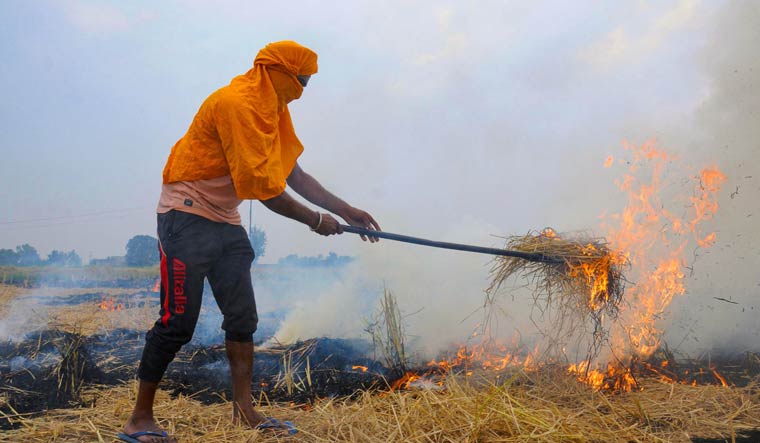 (File) Stubble burning on the outskirts of Amritsar | PTI

Delhi Health Minister Satyendar Jain on Monday attributed the high COVID-19 death rate in the city to the pollution caused by stubble burning and expected a downward trend in it in the next two-three weeks.

The minister told reporters that the pollution due to stubble burning created a big problem in Delhi. It caused problems in breathing and those who had COVID-19 inhaled the smoke, which aggravated the seriousness, he said.

Its effect on the city's COVID-19 death rate will go away in the next two-three weeks since pollution due to stubble burning has lessened in the last few days, he said.

Delhi recorded 6,746 fresh COVID-19 cases on Sunday and a positivity rate of 12.29 per cent, while 121 more fatalities pushed the city's death toll due to the disease to 8,391, authorities said.

This was the fifth time in 11 days that the daily number of deaths crossed the 100 mark in the national capital.

Delhi has reported a death rate of 1.58 per cent among COVID-19 patients as compared with the national fatality rate of 1.48 per cent.

Experts attribute the high figure of daily COVID-19 deaths in the national capital to a large number of "critical" non-resident patients coming to the city for treatment, unfavourable weather, pollution and better "reporting and mapping" of fatalities.

They say the easing of restrictions has exposed the vulnerable population, such as the elderly and those having co-morbidities, to the deadly virus.

Jain said the number of fresh cases as well as the positivity rate are gradually going down in Delhi, showing that the COVID-19 situation is improving.

The health minister said 9,418 hospital beds have been occupied by COVID-19 patients in Delhi currently, whereas 7,900 are still vacant.