Protesters under the Joint Movement Committee blocked a national highway 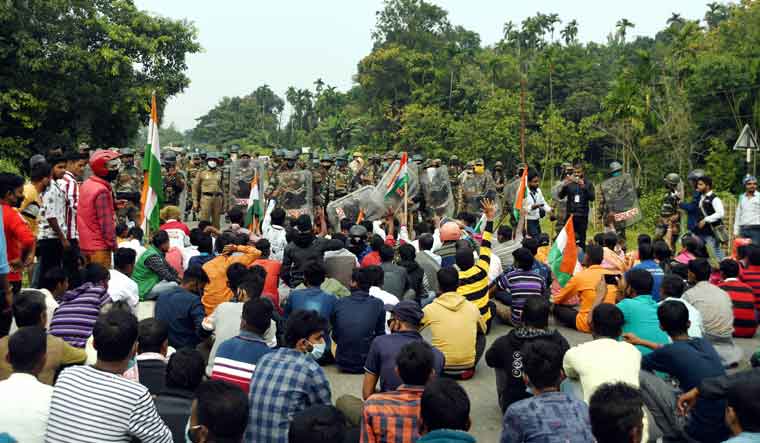 North Tripura: Police try to stop members of the Joint Movement Committee (JMC) who were staging a protest against the resettlement of displaced Bru migrants, at Panisagar in North Tripura district, Saturday | PTI

Protests against the rehabilitation of Bru refugees from Mizoram in Tripura reportedly turned violent on Saturday, prompting police firing that has killed one. Several were injured according to NDTV, with the Tripura State Rifles now mobilised in the northern region of Panisagar and its neighbouring Kanchanpur areas.

According to reports, Srikanta Das has been identified as the deceased.

The protests, organised under the Joint Movement Committee (JMC), were against the resettlement of Bru-Reang refugees from Mizoram to Kanchanpur. Their demand was for the refugees to be resettled equally among Tripura’s eight districts. According to reports, protesters blocked National Highway 8, following which the police opened fire.

Pictures from the incident show an injured fire service personnel being taken to hospital for treatment.

Thousands of Brus had been lodged in the Tripura relief camps since late 1997 in the wake of a communal tension triggered by the brutal murder of Lalzawmliana, a forest guard inside the Dampa Tiger Reserve on October 21, 1997, by Bru National Liberation Front (BNLF) militants.

The move by the Central government, announced in January, to repatriate around 35,000 Bru refugees has been met with opposition in Tripura, with Section 144 imposed in Kanchanpur on Wednesday in view of rising tensions. Protesters have been defying prohibitory orders, attacking non-tribal houses and organising rallies, according to NDTV.

Saturday’s incident comes days after the state-appointed IPS officer V.S. Yadav as its new Director-General of Police. Yadav was earlier the principal secretary of the OBC Welfare Department.