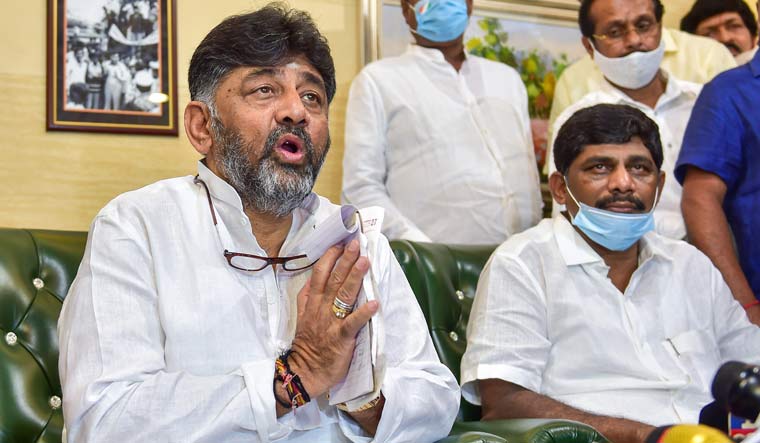 D. K. Shivakumar, chief of the Karnataka Congress unit, has been summoned by the Central Bureau of Investigation(CBI) to its Bengaluru office on November 23, in connection with the disproportionate assets (DA) case filed against him on October 3.

Confirming that he had been served the summons, Shivakumar said, "The CBI sleuths had come to my residence on November 19. But I was busy with a private engagement and was away from home. In fact, I had stayed back at the hotel after the function. I was served the summons once I returned home the following day. As I will be going to Maski with my party leaders, I have sought permission to appear before the CBI on November 25," said Shivakumar, who had been busy with the engagement of his elder daughter, Aishwarya. On November 19, Aishwarya got engaged to Amarthya Hegde, son of Cafe Coffee Day founder Siddhartha Hegde and grandson of former chief minister and BJP leader S. M. Krishna.

The CBI, on October 5, had launched simultaneous raids in 14 locations across Bengaluru, Delhi and Mumbai linked to Shivakumar in connection with an alleged corruption case against the Kanakapura MLA and former minister. The Central agency's sleuths had swooped down on the residences of Shivakumar and his younger brother and Bengaluru South MP D.K. Suresh in Bengaluru, Kanakapura (his ancestral house in Dodda Alahalli and farm house in D. Kodihalli) and their flats and offices in Delhi and Mumbai.

In a press statement following the raids, the CBI said, it had registered a case against the former minister of Karnataka government on the allegations of possession of disproportionate assets to the tune of Rs 74.93 crore in his name and in the names of his family members.

On October 3, the CBI registered a case of amassing disproportionate assets worth Rs 74.93 crore against Shivakumar, during his tenure as minister in the Siddaramaiah cabinet.

The CBI was given the sanction in September 2019 by the state government, but the FIR was filed a year later on October 3, 2020, under sections 13 (1) e and 13 (2) of the Prevention of Corruption Act. It was based on a preliminary inquiry that the Congress leader and his family had amassed assets disproportionate to their known sources of income during the period between April 1, 2013, and April 30, 2018.