We get to see one of the great writers of the future: Duchess of Cornwall 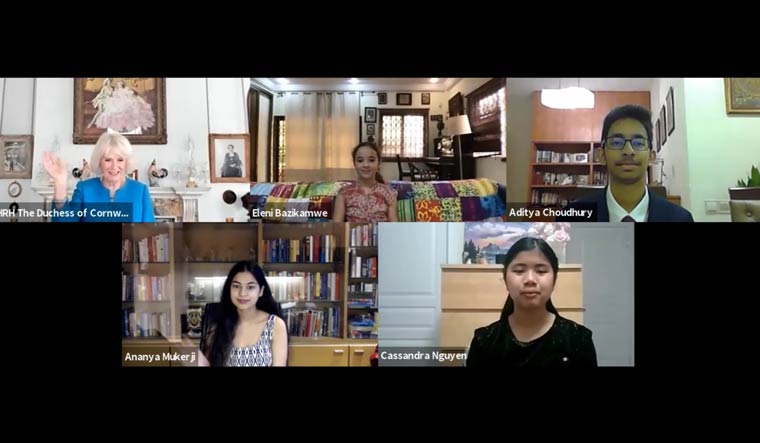 Aditya Choudhury, a 14-year-old Indian-origin student from Singapore, was on Friday named the winner in the Senior category of the Queen's Commonwealth Essay Competition (QCEC) 2020 at the first virtual award ceremony for the world's oldest international school writing competition.

Choudhury was named the winner for his essay 'Voices from the Blue World' during the event that was organised by the Royal Commonwealth Society.

Choudhury joined the virtual event from Singapore as he was conferred the award by Camilla Parker-Bowles the Duchess of Cornwall, who is the royal patron of the event.

I think you must be very well educated and very clever. I have seen a lot of stories coming from Singapore but I really do think yours is the best I have ever read, she said.

Ananya Mukerji, 16, from India was named the Senior Runner-up for her essay The Waters Rise', which was read during the ceremony by Bollywood star Kareena Kapoor Khan.

I thought your story was absolutely brilliant. We get to see one of the great writers of the future, said the Duchess of Cornwall.

The ceremony revealed the winners from a "staggering" 13,000 entries across the 58 Commonwealth nations. In the junior category, the winners included a 10-year-old schoolgirl Eleni Bazikamwe from Ghana and a 13-year-old girl Cassandra Nguyen from Canada.

The ceremony included notable literary figures, actors, and humanitarians from across the Commonwealth. Ambassadors of the Royal Commonwealth Society, actor-author David Walliams and singer Alexandra Burke, were joined by British actor and writer, Stephen Fry, and Kareena Kapoor Khan, to read extracts from the winning pieces during the ceremony.

It also featured highlights of workshops that the Winners and Runners-up had with the Society's Ambassadors, Geri Horner (ne Halliwell) and Lewis Pugh, to discuss their pieces on the theme of Climate Action the Commonwealth.

Each year, aspiring young writers are asked to submit their pieces in response to a theme.

Recent themes have included A Connected Commonwealth (2019), Towards a Common Future (2018), A Commonwealth for Peace (2017), and An Inclusive Commonwealth (2016); drawing out innovative ideas for positive change and encouraging entrants to consider new perspectives.

The themes are rooted in Commonwealth values, providing an interesting introduction to the network and allowing young people to explore their own connection to the Commonwealth, whilst fostering an empathetic and open-minded world view, the Royal Commonwealth Society (RCS) said, adding that the institution has a rich history of nurturing the creative talents of young people around the Commonwealth and endeavour to promote literacy, expression and creativity by celebrating excellence and imagination.

The Competition invites all young Commonwealth citizens and residents, regardless of region, education or background, to share ideas, celebrate their story and have their voice heard. Through partnerships with Book Aid International, Worldreader and the National Literacy Trust, the Society is working to increase access to this opportunity for a wider range of young people, the RCS said.

All entrants and all participating schools receive a Certificate of Participation and one Winner and Runner-up from the Senior and Junior categories win a trip to London for a week of educational and cultural events. PTI AK RUP 11202111