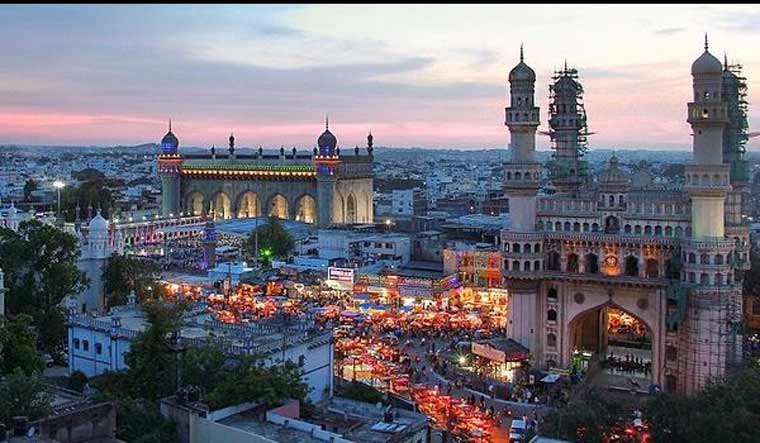 A view of Hyderabad city | via Commons

Greater Hyderabad, a metropolis recovering from floods, battling COVID-19 and plagued by a host of civic issues, played center stage for international issues and national political re-alignments, in the run-up to the municipal corporation elections. As the city gears up to vote on December 1 in the 150 wards covering 625 sq. km, the ruling TRS and the emerging challenger, the BJP, have intensified their aggressive campaign with war of words.

Not surprisingly, it took a communal colour. “People have to choose if they want a Hyderabad that is a terrorist hub or one which is patriotic,” Telangana BJP president Bandi Sanjay said on Thursday in a message to voters. A day earlier, TRS supremo and Chief Minister K. Chandrashekar Rao (KCR), too, asked citizens to make up their mind. “Do you want a communal Hyderabad or a developing Hyderabad?”

Reacting to KCR’s adverse comments on the introduction of CAA at a meeting held in the TRS party office in Hyderabad on Wednesday, Sanjay said, “What happened to the Hindu families in Pakistan, Bangladesh and Afghanistan? Islamic governments  and organisations destroyed Hindus. There were attacks on temples. This is why we need CAA. Is he (KCR) not bothered about them?”

The chief minister had verbally attacked the Narendra Modi-led NDA government on the Indo-China border issue. Interacting with his party workers, he said, “They (BJP) try to instigate communal clashes and get political benefit out of it. Except these things, they have not done anything for the country. They unleash propaganda that they have done something at the borders. At the same time they have no guts to fight against China.”

Accusing KCR of being a “traitor” for not talking in the interests of the country, the BJP state president said that “those who vote for TRS are supporters of Pakistan, China and Bangladesh.”

Bangladesh featured more than once in the preparatory meetings ahead of the Greater Hyderabad Municipal Corporation (GHMC) elections.

KCR said, “The country’s GDP (Gross Domestic Product) rate has fallen to a record depths at Minus. The country’s GDP including the proposed increase has reduced by 31 per cent. Sri Lanka and Bangladesh are in a better position than our country in GDP rate. If the Modi government continues, even Nepal’s GDP will surpass us.”

At the same venue, KCR had once again pitched the idea of a third front, a non-BJP and non-Congress alternative. Earlier, during the 2018 Telangana Assembly Elections and 2019 General Elections, the TRS had tried to stitch an alliance under the banner of ‘Federal Front’. He had met TMC chief Mamata Banerjee and DMK’s Stalin on more than one occasion. But the idea failed to materialise then. Criticising the Modi government for disinvesting in Public Sector Undertakings (PSUs) and following inefficient policies, he said that a conclave will be held in Hyderabad in December second week in which like-minded political parties will participate. He informed that he had already spoken to West Bengal CM Mamata Banerjee, Kerala CM Pinarayi  Vijayan, Delhi CM Arvind Kejriwal, Odisha CM Naveen Patnaik and others in this regard.

While the BJP has made it clear that scrapping of Article 370 in Kashmir and construction of Ram Mandir in Ayodhya will be showcased as achievements during their campaign in the local polls, they are also focusing on highlighting the MIM as a close ally of the TRS. Referring to the recent Bihar elections in which the MIM had won 5 assembly seats, the Telangana BJP chief said, “You have financially supported MIM in Bihar. Now, you are trying to hand over the city and country to them?”

The TRS has taken a cautious approach to this allegation and denied any tie-up with the MIM in the upcoming polls. “Last time we won 5 seats in the old city. This time we will have 10 seats and in those seats we will defeat MIM. We don’t have friendship with anyone. The Mayor will be from our party and not any other party,” said TRS working president and Municipal Development minister KT Rama Rao on Thursday.

The Congress has alleged that the TRS, the BJP and the MIM were trying to divide the society on communal lines for political gains. Telangana Pradesh Congress Committee (TPCC) working president and MP A. Revanth Reddy alleged that Chief Minister Rao and BJP state chief B. Sanjay were enacting a drama of political rivalry while both were sailing on the same boat and pursuing common agenda in connivance with MIM president Asaduddin Owaisi.