Top shooter cop lost job after getting mentally disturbed; had been missing for years 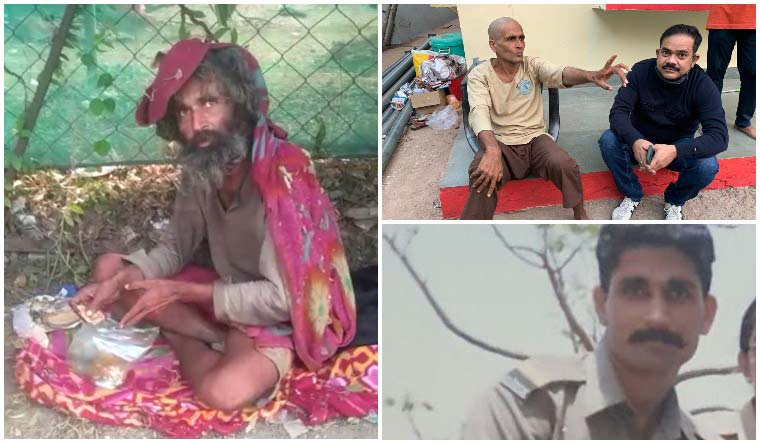 Manish Mishra was living on Gwalior roads as a destitute; (top right) with his friend DSP Ratnesh Tomar; (below) when Mishra was in service

In an interesting turn of events that could only be termed as a quirk of destiny, a former cop who was missing for several years was found begging on Gwalior roads by his former batchmates who have since become deputy superintendents of police (DSPs).

The cops have now put up their ex-colleague at a shelter home and are getting him treated by psychiatrists. They have been assured that the ex-cop Manish Mishra will get better soon.

Crime Branch DSPs Ratnesh Singh Tomar and Vijay Singh Bhadoria, who were returning from by-poll counting day duty in the wee hours of November 11, decided to stop and offer some food to a beggar who was rummaging through garbage near a marriage hall in Lashkar area of Gwalior.

The cops got talking to the beggar and, moved by the fact that he was shivering in cold, DSP Bhadoria offered him his jacket while DSP Tomar who was wearing casual shoes decided to give it to him.

“We tried to chat up with him but he remained silent mostly. But when we started to leave, he suddenly called out at me with my first name,” Bhadoria told THE WEEK. He also then called Tomar by his first name.

Startled, the cops started questioning the destitute who soon revealed himself to be Manish Mishra who had joined the Madhya Pradesh police as sub-inspector in 1999 along with Bhadoria and Tomar.

“Manish, a handsome man, was among 10 top shooters in our batch of around 250 and also a good athlete. He had a good run as in-charge of police stations in different districts of the state and the last posting we know of him was in Datia till 2005,” Bhadoria said.

DSP Tomar said that there had been reports of him getting mentally disturbed and remaining absent from duty for long, following which he was terminated from service. “His family had taken him back to their native village and was getting him treated. But the last we heard of him was about 8 to 10 years ago. He was prone to running away from home repeatedly and finally went missing,” Tomar said.

Bhadoria said that Mishra, around 46 now, is a native of Shivpuri district and his father was also a policeman. He was married but probably got divorced, he said. His elder brother is also a cop (inspector Umesh Mishra) posted in Guna district and he has been informed about Manish, Bhadoria said, adding they were not sure whether the family had tried to get in contact with the ex-cop.

However, the two DSPs have decided to monitor the well-being of their batchmate. “The doctors who are treating him have told us that he has started to recall certain things though he is still incoherent most of the time. They have said that there are all possibilities of him being cured,” Bhadoria said.

Mishra is now staying at the Swarg Sadan shelter home in Gwalior and most of the time refuses to answer direct questions, though he responds well to what the two DSPs – who ‘rescued’ him – tell him to do.