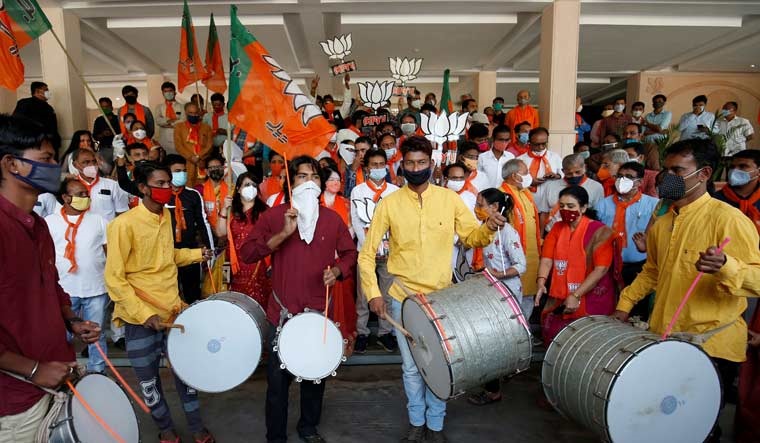 Opposition Congress' humiliation in electoral battle has continued in Gujarat with the ruling BJP winning all the eight assembly seats.

If the results of the bypolls, which were announced on Tuesday, are any indication, the Congress will face a mammoth task in the elections to the local civic bodies that are likely to be held in 2021. The elections were scheduled this year but have been postponed due to COVID19.

Celebrations at the BJP's state headquarters, Kamalam, broke out even before the final results were out. Chief Minister Vijay Rupani claimed that the results were trailer of the upcoming civic body elections.

The byelections were necessitated as eight Congress MLAs resigned ahead of the Rajya Sabha elections earlier this year. The BJP fielded five Congress turncoats.

The Congress' network proved weak as against BJP's network that is till the booth level.

Soon after taking over as the state party president in July, Patil had made it clear that efforts will be made to strengthen the ticket aspirants within the BJP, thus giving an indirect hint that turncoats should not expect posts. Eight Congress MLAs had resigned before Patil had taken over.

What is more worrisome for the Congress is that it had performed badly in tribal and minority dominated areas, which are considered its strongholds.

Moreover, what is significant is that the BJP has made a clean sweep at a time when there have been allegations against the government over "inapt handling" of COVID-19 situation.