Nitish set for unique record if he returns as CM 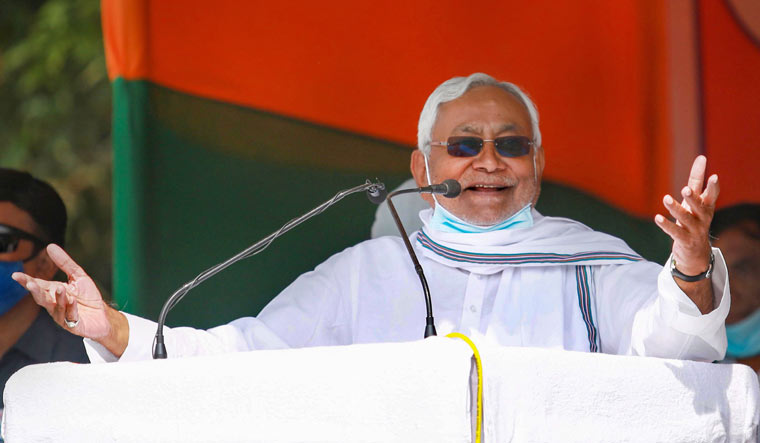 Bihar Chief Minister Nitish Kumar addresses a gathering during an election meeting, for the assembly polls, in Katihar | PTI

With the BJP-led NDA holding a steady lead in counting of votes in the Bihar Assembly polls, The JD(U) has declared the alliance will form the government under Chief Minister Nitish Kumar.

As of 2pm, the NDA was leading in 127 seats in the 243-member Bihar Assembly. With the BJP having previously stated an NDA government would be led by Nitish Kumar, the incumbent Bihar chief minister may well achieve a unique feat: taking oath as chief minister seven times.

Nitish first became chief minister after the Bihar Assembly election in March 2000 when he was part of the Samata Party. Nitish lasted eight days in March as chief minister but resigned before a trust vote as the Samata party-BJP alliance lacked a majority. Following this, Rabri Devi, Lalu Prasad Yadav's wife, returned to power. The JD(U) was formed in 2003 following merger of multiple breakaway groups of the erstwhile Janata Dal.

Nitish was next sworn in as chief minister after the BJP-JD(U) alliance won the 2005 Assembly polls. The alliance was re-elected to power in 2010.

Nitish resigned as chief minister in May 2014, taking responsibility for the JD(U)'s poor performance in the 2014 Parliament elections, which it contested against the BJP and RJD. Jitan Ram Manjhi took over as chief minister.

In February 2015, Nitish took oath as Bihar Chief Minister for the fourth time, after gaining the support of the RJD and Congress. Nitish contested as part of a grand alliance in the Assembly elections later in 2015 and regained power.

He resigned in July 2017, citing differences with the RJD. However, Nitish took oath as chief minister for the sixth time just days later as the JD(U) sealed an alliance with the BJP.