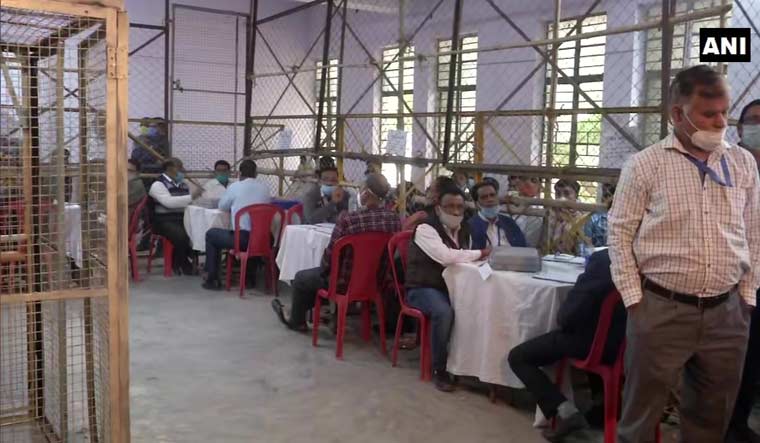 Counting under way at a centre in Morena | via ANI

The Bharatiya Janata Party is poised to get a clear majority in the Madhya Pradesh bypolls as early trends showed the national party surging ahead in 19 seats out of the 28 assembly constituencies with the Congress leading in just eight.

The BSP is leading in two constituencies.

The counting of votes began at 8 am in 19 districts where the bypolls were held on November 3.

BJP’s Tulsiram Silawat is leading from Sanver, while Rajvardhan Singh Dattigaon is ahead in Badnawar, Brajendra Singh Yadav from Mungaoli, Narayan Singh Pawar from Biora, Hardeep Singh Dung from Suwasara, and Jajpal Singh Jajji from Ashok Nagar against their rivals from the Congress.

Congress’ Vipin Wankhede and Rajendra Singh Baghel are ahead against their challengers from the BJP in Agar and Hatpipalya constituencies, respectively.

Meanwhile, in Chhattisgarh’s Marwahi Assembly seat, the Congress has taken the lead in the newly formed Gaurela-Pendra-Marwahi district. The seat was once a bastion of former chief minister Ajit Jogi, the Janata Congress Chhattisgarh (J) MLA who passed away in May this year, necessitating the November 3 bypoll.