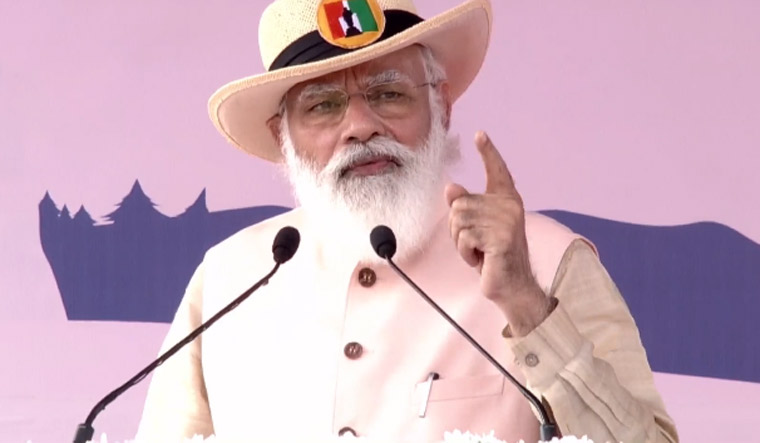 Prime Minister Narendra Modi on Saturday lauded the unity of the 130 crore-strong population of the country in fighting COVID-19.

He was speaking at a parade organised at the Statue of Unity in Kevadia, Gujarat, on the occasion of the 145th birth anniversary of Sardar Vallabhbhai Patel, the first home minister of India.

Modi acknowledged the efforts of the police force during COVID-19 pandemic and said that the nation would not forget their sacrifices.

Modi is on a two-day visit of Gujarat. Later in the day, he will inaugurate a seaplane service, the first of its kind in India, between Sabarmati River Front in Ahmedabad and Kevadia.

Modi said that the Statue of Unity and the tourist attractions that have been thrown open for the public would soon be on the world tourist map and would become a place of pilgrimage. On Friday, he had inaugurated an Ekta Mall, cruise service, safari park and cactus garden among many other attractions.

Highlighting the efforts of the armed forces, Modi said that today the armed forces have the capability to give a fitting reply to those who raise their heads against India.

He, however, said that even as India progresses and the armed forces are very capable, the world faces the challenge of terrorism. Modi said that it is necessary to unite to fight terrorism.

India, he said, has been a target of terrorism. Modi appealed that terrorism should be defeated by remaining united at the international level.

Modi did not forget to mention that it was on this day last year that Article 370 was done away with. According to him, the move was undertaken from the inspiration drawn from Sardar Vallabhbhai Patel. Modi said that had Patel been alive, the task of doing away with Article 370 would not have come on to him. He said that the hurdles of development of Kashmir have been removed.

Talking about the Pulwama attack and without naming the Congress, Modi criticised the opposition party for its alleged “politics” after the Pulwama attack. Modi said that if the party (read Congress) had respect for Sardar Vallabhbhai Patel, then the party should stop playing into the hands of forces that are inimical to the interests of the country. He said that if the Congress played into their hands, then it would neither do good to the country nor their own party.

Modi said that due to the unity of the country, he had then continued to take any allegations silently without responding.