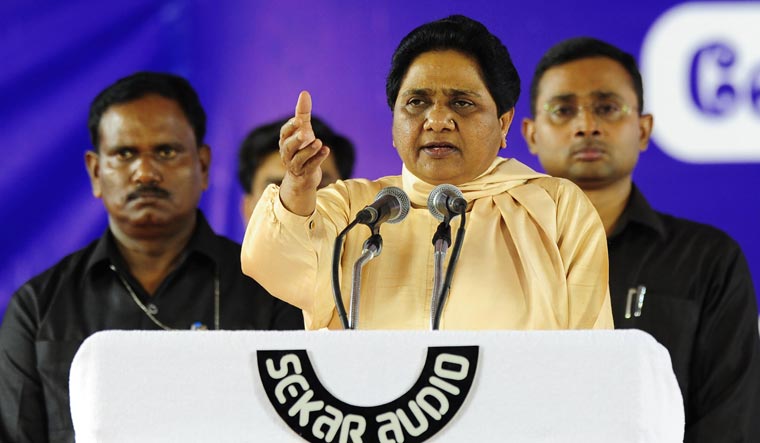 A day after a group of BSP MLAs met Akhilesh Yadav at the Samajwadi Party headquarters in Lucknow, BSP chief Mayawati on Thursday lashed out at her erstwhile ally. Mayawati also suspended the MLAs who met Akhilesh.

The move by the BSP MLAs had triggered speculation they could join the Samajwadi Party amid claims that Mayawati has been close to the BJP.

The BSP and SP sewed up an alliance for the 2019 Lok Sabha polls, which fell apart after the BJP swept back to power.

Speaking to mediapersons on Thursday, Mayawati was quoted by ANI as saying, "Our party had joined hands with SP to fight communal forces during Lok Sabha elections. Due to their family in-fighting, they couldn't gain much from 'Gathbandhan' with BSP. They stopped responding to us post-elections and hence, we decided to part ways with them."

"I want to disclose that when we decided to contest polls with SP for Lok Sabha elections in UP, we worked very hard for it but from day 1 of our coalition, SP chief kept telling S.C. Mishra that since BSP-SP had joined hands, I should take back my June 1995 case," Mayawati said. Mayawati was referring to an incident on June 2, 1995, when SP workers allegedly threatened to manhandle her at the government guest house in Lucknow. The incident ended the first alliance between the BSP and SP, which was in power in Uttar Pradesh at the time.

Mayawati told the mediapersons "When we saw Samajwadi Party's behaviour towards us after Lok Sabha election results, we realised that we have committed a big mistake by taking back our 2nd June 1995 case against them and we shouldn't have joined hands with them. We should've thought bit deeply."

Mayawati declared that in order to defeat the Samajwadi Party, which holds the majority in the 100-member state Legislative Council, the BSP would vote for the BJP or other parties in future MLC polls. "We have decided that to defeat SP candidate in future MLC elections in UP, we will put all our force and even if we have to give our vote to BJP candidate or any party candidate, we'll do it,” she said.

The latest flare-up in SP-BSP tension comes as the two parties prepare to contest elections for 10 Rajya Sabha seats from Uttar Pradesh on November 9. The SP has 48 members in the Uttar Pradesh Assembly and BSP only 18.

Four of the BSP MLAs who met Akhilesh had been among a group of 10 BSP MLAs who proposed the name of Ramji Gautam as the BSP's candidate to one Rajya Sabha seat. The ‘rebel’ MLAs demanded the disqualification of the candidature of Gautam, alleging the signatures of the four "proposers" had been forged.

The SP is supporting industrialist Prakash Bajaj for the Rajya Sabha seat against Gautam. The BJP, which has 304 members in the 403 member UP Assembly, is contesting eight seats and is expected to win all eight comfortably.

The Print reported on Wednesday the ‘rebel’ BSP MLAs "have decided to quit the party because they are upset with what they perceive to be the party’s ‘internal agreement’ with the BJP for a Rajya Sabha seat".