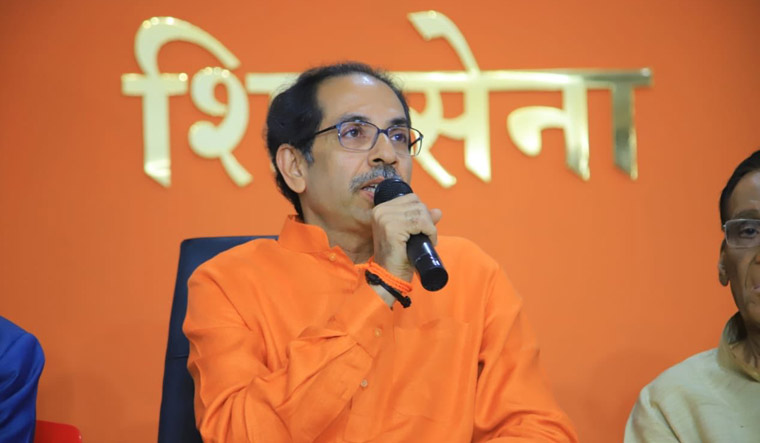 The Uddhav Thackeray-led Shiv Sena's Hindutva has got "adulterated" in the company of its new allies NCP and the Congress, and the party now needs a "certificate" on the ideology from the BJP-RSS, senior BJP leader Ashish Shelar said on Monday.

Picking holes in Thackeray's speech made during the Sena's annual Dussehra rally in Mumbai on Sunday evening, Shelar termed it as a "maha flop show" which was laced with "jealousy".

Shelar also charged Thackeray with misconstruing Rashtriya Swayamsevak Sangh chief Mohan Bhagwat's annual Dussehra speech and asked the chief minister to not compare the Shiv Sena's Hindutva with that of the RSS.

Citing Bhagwat's speech in Nagpur on Sunday morning, Thackeray had stated, "the RSS chief said Hindutva has been narrowed down to only observing puja rituals".

"Those who wear black cap like him should understand this if they have brains," Thackeray had said, in a veiled attack on Maharashtra Governor Bhagat Singh Koshyari on his remarks over Hindutva while asking for reopening places of religious worship earlier this month.

Speaking to reporters in Mumbai, Shelar said, "The RSS chief's speech was mentioned in the speech (by Thackeray). Uddhav ji compared the Hindutva of the RSS and that of Shiv Sena of today. We humbly ask him not to compare the two."

The Hindutva of the RSS "is the skin", while Thackeray removed the shawl of Shiv Sena founder the late Bal Thackeray's Hindutva for power, the former Maharashtra minister said. "It would have been better had he heard Bhagwat's speech in its entirety. He picked convenient parts from the RSS chief's speech," Shelar alleged.

Shelar also targeted Thackeray for mooting the idea of e-bhoomi pujan for Ram temple construction in Ayodhya due to the COVID-19 outbreak as well as for "supporting the CAA first and then opposing it".

Bhagwat never mixed his positions on issues like the Shiv Sena does, the former BJP minister alleged. "Uddhav ji, your Hindutva has become adulterated in the company of the Congress and NCP. Yes, we reiterate, you will need a certificate of Hindutva.You will need to take it from the RSS and the BJP. And yes, from the black cap too," Shelar added.

On the chief minister daring the opposition to bring down his government, Shelar said Thackeray's comments stemmed for insecurity, adding that the Maha Vikas Aghadi (MVA) government would collapse "due to its own deeds".

In a further taunt, Shelar said the "only effective speech" made at the Sena's Dussehra rally was by its Rajya Sabha MP Sanjay Raut.

He said Thackeray had no right to speak on Hindutva after forming alliances with "secular parties" in a "dishonest manner" by snapping ties with old ally BJP. "The Shiv Sena could win 56 seats (in the 2019 Maharashtra assembly polls) due to the blessings of PM Modi," Rane claimed.

At the rally, Thackeray had broken his silence on allegations against his son Aaditya in the Sushant Singh Rajput death case, saying, "Those crying for justice for Bihar's son are indulging in character assassination of Maharashtra's son."

Responding to Thackeray's remarks, Rane reiterated his earlier claim that actor Sushant Singh Rajput was "murdered". "Those accused of the murder will go behind bars one day. Among them will be a minister, who is his (Thackeray's) son?" he said.

Rane, a former Shiv Sena leader, however, did not substantiate his claim with proof and also did not name the minister.