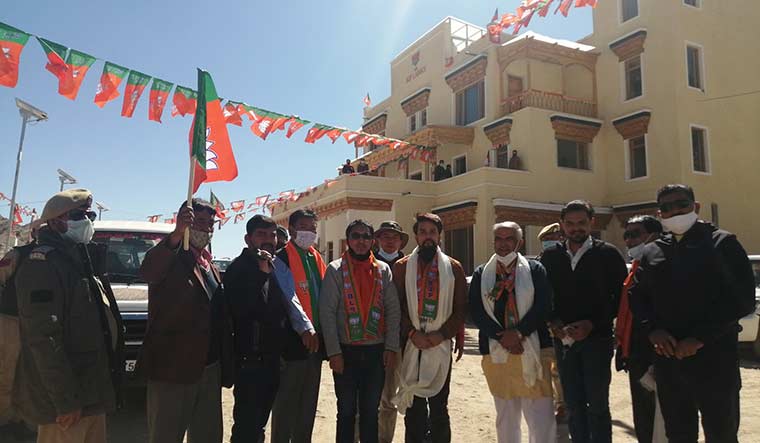 The BJP on Monday retained power in the Ladakh Autonomous Hill Development Council (LAHDC) - Leh by winning 15 out of 26 seats for which polling was held on October 22.

The victory for the party comes amid high tensions with China due to its incursions in Ladakh.

The victory is a boost to the party’s image and an acknowledgment of the granting of union territory status to Ladakh on August 5 last year.

This is the first election that was held in Leh after Ladakh was granted UT status by the Centre. The last election to LADHC-Leh was held in 2015, in which the BJP won 18 seats, the Congress five, the NC two and an independent candidate won one.

This election, the Congress improved its tally to win nine seats.

The Arvind Kejriwal-led Aam Aadmi Party (AAP), which was contesting the election for the first time, did not manage to win any seats. The NC and PDP did not participate in the polls.

The LAHDC Leh has 30 members. Elections are held for 26 seats, with positions for four seats being nominated. There were 94 candidates in the fray including 23 each from BJP and the Congress, 19 from AAP and 23 independent candidates.

Despite the COVID-19 pandemic, 65.07 percent of the 89,789 voters went on to cast their ballot. For the first time, EVMS were used for polling in the cold region of the country.

Leh, which is a Buddhist-dominated district of Ladakh, has demanded the implementation of the sixth schedule for the UT to guard against demographic change and dilution of the unique cultural and tribal identity.

Earlier, several political ,social and religious parties in Leh had formed the 'Peoples Movement' and called for a boycott of the LADHC elections until the Centre agreed to grant the region protection under the sixth schedule. It was only after Home Minister Amit Shah’s promise to consider the demand of the People's Movement after elections that the boycott call against the elections was withdrawn.