Several senior leaders have fallen victim to the contagion 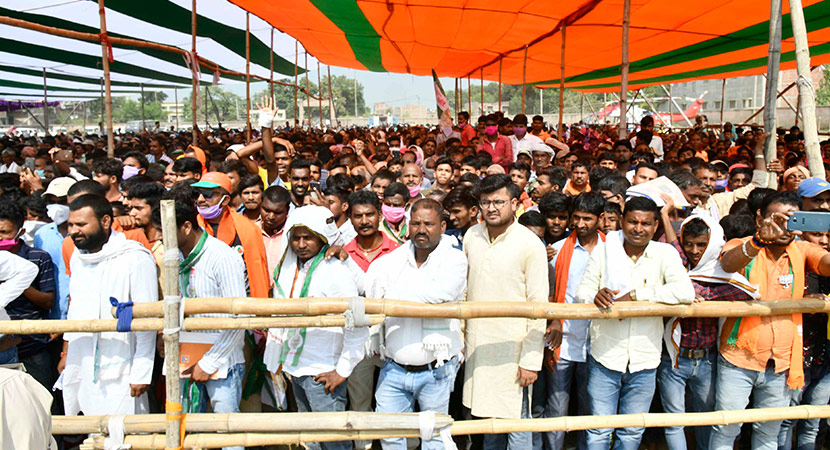 With the campaign for the Bihar assembly election reaching a fever pitch, the Election Commission's warning of stern action for violation of COVID-19 protocol has gone unheeded with people gathering in huge numbers at rallies without wearing masks or caring for social distancing.

However, these have not had any salutary effect and the crowds remain unrestrained as people jostle for occupying vantage positions at election rallies. Strict COVID-19 protocol was maintained at the rallies addressed by Prime Minister Narendra Modi at Dehri, Gaya and Bhagalpur, and Congress leader Rahul Gandhi's public meetings at Hisua and Kahalgaon on Friday, but elsewhere the crowds throw caution to the wind in their unbridled enthusiasm.

The Election Commission had on October 21 directed Bihar's Chief Electoral Officer and district administrations to "invoke appropriate and relevant penal provisions" under the Disaster Management Act and the Indian Penal Code against candidates found violating its orders.

"Instances of such public meetings have come to notice of the Commission, where large numbers of crowds have assembled in utter violation of social distancing and the political leaders/campaigners are addressing the gathering without wearing masks in complete disregard of the guidelines/ instructions issued by Election Commission," the poll panel had said.

Candidates and organisers found violating the poll watchdog's instructions could face cases and imprisonment up to two years under the relevant sections of the Disaster Management Act, 2005, and the IPC.

Hundreds of people are still seen attending the rallies of top leaders including Chief Minister Nitish Kumar and the grand alliance's chief ministerial candidate Tejashwi Yadav without wearing face masks and pushing and shoving each other for space.

"When questioned why are they not wearing face masks, they come up with lame excuses like they forgot it at their home or fish out one from their pocket saying they find it difficult to put it on due to oppressive heat," said a police officer.

Additional chief Electoral Officer Sanjay Kumar Singh said magistrates deployed at rally venues have been instructed to strictly enforce COVID-19 norms, including wearing of masks and maintaining social distancing. "We are trying to enforce the Election Commission's guidelines to the extent possible. If someone is found deliberately trying to violate the social distancing norm, then a case will be lodged against them," he told PTI.

He said several cases have been registered against those found violating the COVID-19 protocol but expressed his inability to share the exact number. PTI reporters covering election rallies found leaders on the dais wore masks and maintained appropriate physical distance from each other, but people tumbled over one another to have a glimple of helicopters landing at the rally grounds.