Another Congress MLA resigns amid bypolls heat, party down to 87 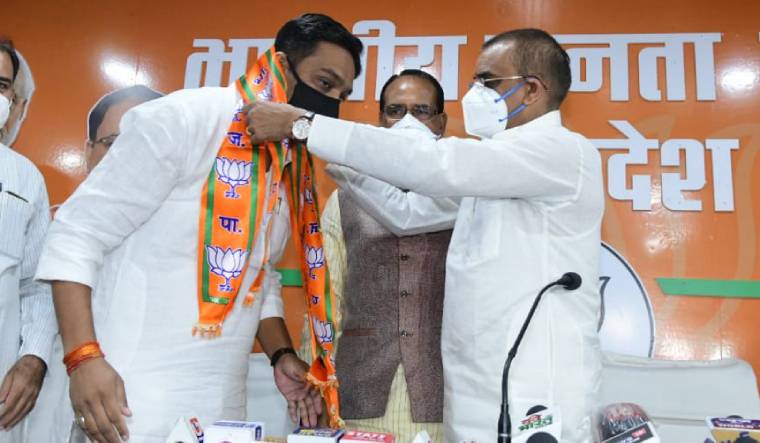 Rahul Lodhi joined the BJP on Sunday | via Twitter/@BJP4MP

Amid the heat of the crucial bypolls to 28 seats in Madhya Pradesh, the Congress suffered another blow as Damoh MLA Rahul Lodhi resigned from membership of the state Assembly and joined the Bharatiya Janata Party soon after. Lodhi is the 26th Congress MLA to resign, and the tally of the party in the Madhya Pradesh Assembly is now down to 87.

Although the BJP is portraying Rahul Lodhi’s action as another rejection of ex-chief minister Kamal Nath’s leadership in Congress and triumph of pro-people BJP government in the state led by Chouhan, political watchers have expressed apprehensions that the action might also indicate that the BJP was not confident of winning too many seats in the bypolls and was thus trying to consolidate its position further ahead of bypolls.

BJP has 107 MLAs in the house and the support of most of the seven non-Congress opposition MLAs. The majority mark in the MP Assembly is at 115. However, in case the BJP does not win too many seats, the non-Congress opposition MLAs might shift positions to cause trouble to the ruling dispensation. The BJP was, therefore, trying to reduce the Congress tally as much as possible, a section of political watchers feel.

In a Twitter post, MP Congress said, “by purchasing another MLA, the BJP has made it clear that it was not winning even a single of the 28 seats. People of Madhya Pradesh will give a strong reply to the BJP.”

Congress Rajya Sabha member Digvijaya Singh tweeted, “Another MLA got sold by the use of black earning of Mama (Chouhan). It seems Mama will pack the BJP up with betrayers of Congress more than original BJP leaders. I pity all those RSS and BJP workers who have up the party to this level.”

Singh also added “Where is Jayant Malaiya?” in reference to BJP ex-finance minister who was defeated by Rahul Lodhi in 2018 Assembly polls by a slender margin of 798 votes. The Congress has been saying that the senior BJP leaders’ position was getting weakened due to “purchase” of ex-MLAs of Congress.

Lodhi’s action comes just three months after his cousin Pradyumna Singh Lodhi in a similar manner resigned his Bada Malhera seat won on Congress ticket, to join the BJP. Within hours he was made the chairman of the MP State Civil Supplies Corporation.

There had been speculations at the time that Rahul Lodhi will follow his elder cousin, but he had denied any such possibility. MP Congress committee chief Kamal Nath had then spoken to Lodhi and two other MLAs from Bundelkhand region who were also speculated to be in a shifting mode.

Speaking after joining the saffron party on Sunday, Lodhi said that welfare of the state and Bundelkhand region was seriously compromised during the Congress as the party did not fulfil its electoral promises and the party was now falling apart. He added that he was impressed by the Shivraj Singh Chouhan-led BJP government’s sustained efforts for welfare of the poor people during the past six months and decided to join the party.

Lodhi also said that he was embarrassed by the way Congress leaders were using foul language during the election campaign against senior leaders of BJP and women. He was also seen touching Chouhan’s feet on the occasion.