Nitish Kumar's party released its manifesto for the Bihar polls 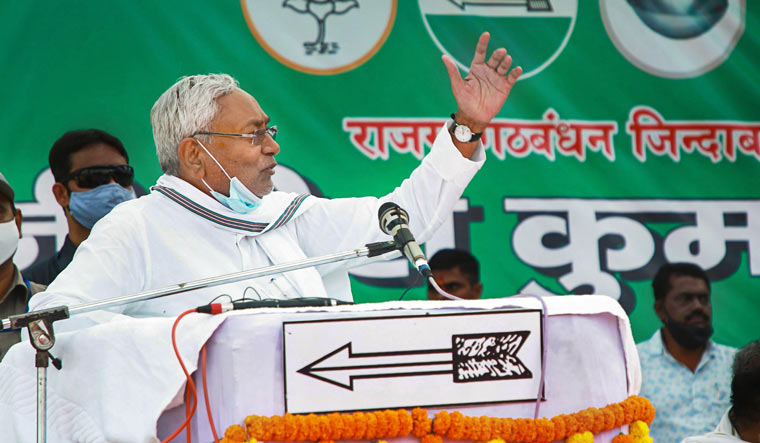 The ruling JD(U) on Thursday released its manifesto for the Bihar polls, promising progressive schemes under second leg of the 'seven resolves' of good governance in the next five years if it returned to power.

Apart from outlining its future plans for the development of Bihar,Chief Minister Nitish Kumar led party also referred to poll promises made by the rival Grand Alliance, including approving 10 lakh jobs, and sought to know from where would they manage Rs five lakh crore additional money that will be required for fulfilling their "lofty" announcements.

It also hit out at the Congress, an ally of the RJD in Mahagathbandhan, for announcing that it would review the prohibition laws in force in the state and mocked at it for putting photograph of Mahatama Gandhi in its manifesto but talking about ending laws against liquor consumption, which father of the nation always espoused.

Bihar unit President of the JD(U) Basistha Narayan Singh and its working president Ashok Chaudhary released the party manifesto for the three-phase state elections at a press conference here.

The manifesto puts a stamp to Kumar's assertions that after completion of "Saat Nischay" (seven resolves) part I in his 2015-20 term, his future government would launch part II of it if voted back to power.

The first part of the seven resolves comprised seven schemes to ensure basic necessities such as supply of piped drinking water, construction of toilets and concrete drains and electricity connection to every household, which the chief minister has said many times have almost been achieved.

Its second part will focus on enhancing skill of youths to brighten their jobs prospect, promoting entrepreneurship among women by providing them financial assistance, irrigation facility to every agriculture field and additional health facilities for people and animals.

Giving details, the manifesto promised that it would open centre of excellence in the Industrial Training Institute (ITIs) in every district and Polytechnic at Sub Division levels to provide training to youths in the advanced technology of optical fibre, solar, internet banking and transformer manufacturing among others to perk up the chance to get employment.

It also declared that a new department of Skill Development and Entrepreneurship will be set up for the purpose.

For further empowering women, it said Rs 5 lakh grant and interest-free loan of the same amount would be provided to a woman starting a new venture.

The JD(U) manifesto also promised providing irrigation water to every farm land, installing solar lights on the streets of every villages, homes for senior citizens and urban poor and additional health facilities for the citizens as well as for the animals.

Kumar who had talked about seven resolves part II in his first media interaction after announcement of dates for the three-phase polls in Bihar, has been profusely talking about his future plans at his election meetings.

In addition to underscoring its own poll promises, the JD(U) categorically highlighted some of the "lofty" announcements made by the rivals including providing 10 lakh jobs and sought to know from where the money needed for them would come.

Regarding Tejashwi Yadav's much trumpeted 10 lakh jobs approval in the first cabinet of the future grand alliance ministry, that includes filling 4.5 lakh existing vacancies and creating 5.5 lakh new jobs, the JD(U) leaders said it would incur Rs 58,000 crore additional money and sought to know from where would it come.

Similarly for realising declaration of giving employment under MGNREGA to every individual in place of existing each households and increasing mandays from 100 to 200, they sought to know the source of Rs 53,000 lakh crore that would be needed for the purpose.

In addition, for doubling up honorarium of aganwadi and ASHA workers, librarirans and cooks under mid-day meal scheme among others a sum of Rs 4150 cr would be required, they said and queried about the source of it.

The JD(U) leaders said that the state at present has a budget of Rs 2,11,000 crore which includes Rs 1.06 lakh crore non-plan expenditure like paying salaries etc and rest of the money for planned expenditures under different heads.

"An assessment of their series of announcements shows that a sum of Rs 1,44,500 crore additional money every year would be needed," they said and queried the leaders of the principal rival coalition from where would the additional expenses come.

On the Congress promise in its manifesto for the Bihar polls that it would review prohibition laws and bring necessary amendments to it, the JD(U) leaders said "they have displayed photograph of Mahatama Gandhi in its vision document but talking against the laws to prevent consumption of alcohol which the father of the nation always championed".

Kumar government has declared Bihar a dry state since April 2016.