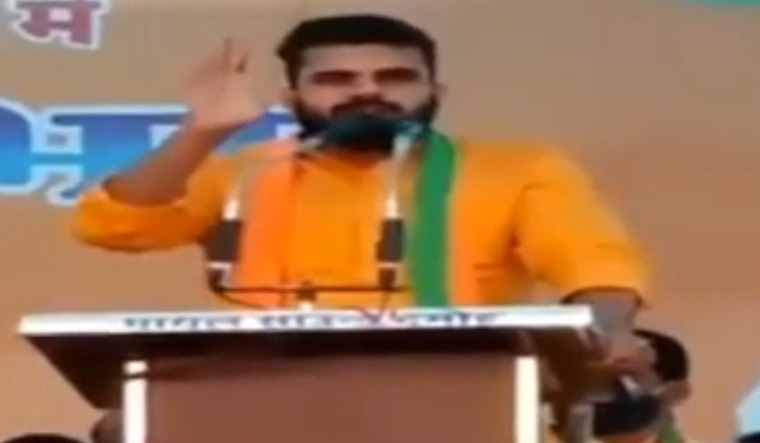 Even as the date for bypolls in Madhya Pradesh nears, a slew of controversial videos continue to hit the campaign scene. On Thursday, at least four such videos, involving BJP ministers and a minister’s son, went viral on social media.

The Congress lodged three separate complaints with the office of Chief Election Officer (CEO) in context of two of these videos and a comment by Indore MP Shankar Lalwani.

Among the controversial videos that have surfaced is of minister Imarti Devi who is currently in news because of the alleged offensive comment made against her by former chief minister Kamal Nath.

In a video, shared by spiritual guru and Congress star campaigner Acharya Pramod on Twitter, Imarti Devi is heard saying Kamal Nath’s mother and sister might be ‘items from Bengal’ but she does not know that. She is also heard repeatedly referring to Kamal Nath as ‘man from Bengal’ and ‘Bengali man’ who does not have the manners of speaking and who came to MP just to become the chief minister.

The Congress, which seems to be in a mood to let the controversy surrounding the woman minister lie low, has officially not moved against the video. Sources said the party is unwilling to drag the controversy further, even as Kamal Nath has been served notice by the Election Commission of India (ECI) on his alleged ‘item’ jibe on Imarti Devi.

The MP Congress has, however, lodged a complaint with the MP CEO office on another viral video of minister Bisahulal Singh where he is seen brandishing a firearm while threatening political workers/supporters. Earlier, Singh’s video where he used the term ‘mistress’ for the wife of the opponent Congress candidate led to a FIR being registered against the minister in Anuppur.

Even as home minister Narottam Mishra said the gun-toting video of Singh was eight years old (when Singh was in the Congress), the Congress has demanded a probe into the video and consequent action.

The Congress has also lodged a complaint against a video where Abhishek Bhargava, son of senior minister Gopal Bhargava, is heard saying at a campaign meet in Surkhi of Sagar that ‘money showers in the houses of ministers and it is upon these ministers to hoard the money or distribute it among people’. The Congress has said this statement of Bhargava amounted to luring people with money.

The third complaint was made against MP Shankar Lalwani who reportedly displayed a picture of Kamal Nath with a Bollywood actress to call him ‘Kamar-Nath’ (in reference to ‘waist’). The Congress has called this term offensive in its complaint.

The fourth video that went viral was of minister O.P.S. Bhadoria, who is contesting from Mehgaon in Bhind, where he is allegedly heard calling upon workers to cast bogus votes. “Gets the votes of those who are there and also those who are not there,” the minister is heard saying in the viral video, the authenticity of which could not be ascertained. Sources said the video was old and had been circulated again.