'When is Modi planning to remove Chinese from our territory?,' asks Rahul 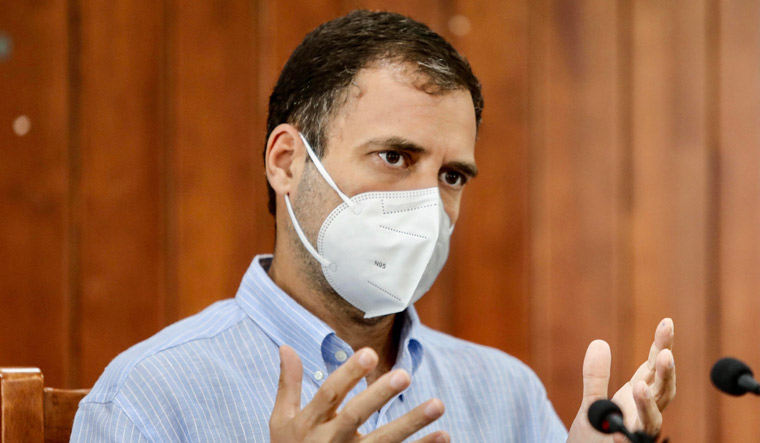 Congress leader Rahul Gandhi on Wednesday kept up his attack on Narendra Modi over the Sino-India military standoff, asking people whether they have heard the prime minister mention China over the past couple of months.

Winding up his three-day visit to his parliamentary constituency, the Wayanad MP also claimed that the prime minister doesn't want "take" people's attention "to the fact that the Chinese have occupied our land."

He also asked the prime minister when he was planning to "remove the Chinese from our territory."

"Do you think there is any bigger issue than that right now. It's the biggest issue and the prime minister doesn't have a word to say about it."

"Why? Why does the prime minister not have a word to say about Bharat Mata's territory? It's a strange thing," he said.

On Tuesday, Gandhi had attacked Modi telling him the nation wants to know when will the Chinese troops be "thrown out" of Indian territory.

The union government had earlier termed as "mischievous interpretation" the Congress' claims that China had occupied Indian territory in the eastern Ladakh region.

India and China are locked in an over five-month-long military standoff along the Line of Actual Control (LAC) in eastern Ladakh.

Meanwhile, in a tweet, Gandhi alleged India "continues to suffer from Modi-made disasters."

"India continues to suffer from Modi-made disasters. The stories of starvation deaths, especially of children, are heartbreaking. How can GOI (government of India) allow this when the godowns are overflowing with excess food?" he said in the tweet.

Later, Gandhi inaugurated the Arthroscopic surgery unit and ICU Ventilator installed under the MP's fund for local development at the district hospital in nearby Mananthavady.

He lauded doctors and health workers for their dedicated service.

He also reiterated his appreciation for the exemplary work done by the Kerala government against the COVID-19 pandemic.

Gandhi visited a paddy field at nearby Thrissileri in Mananthavady to know about organic farming activities by the Thirunelli Agro Producers Company with NABARD assistance there.

Gandhi also met Cheruvayal Raman, a traditional paddy farmer, who has a treasure of about one hundred indigenous seeds.

Earlier in the morning, Gandhi visited Kochillam in Panamaram, where migratory birds flock during seasons.

Later in the day, the Congress leader proceeded to Kannur and left for Delhi by a special flight.