Will the delay in Jayalalithaa death probe turn into a poll issue in Tamil Nadu?

DMK's MK Stalin has stirred a row within the ruling AIADMK 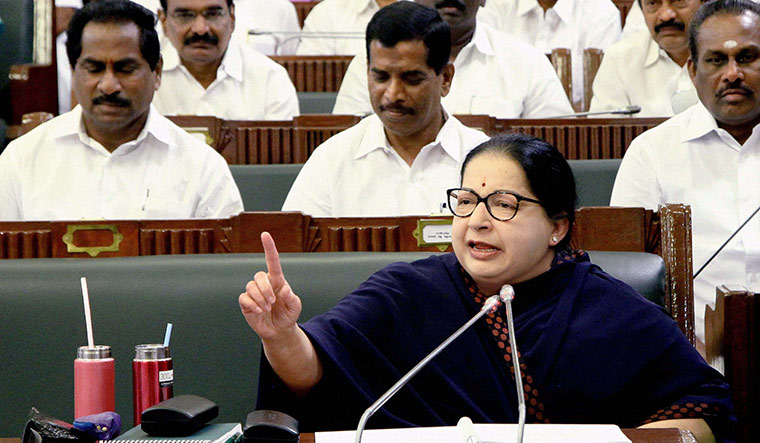 A day after Justice A. Arumughaswamy commission, set up to probe the mystery behind the death of former chief minister J. Jayalalithaa, came down heavily on the Tamil Nadu government advocates for not pursuing the legal battle to vacate the stay order on the commission, the issue has turned into a political debate in the state. DMK president and opposition leader M.K. Stalin stated that the DMK, when elected to power, will unmask those responsible for Jaya's death and bring them to justice.

On April 26, 2019, the Supreme Court had stayed the entire proceedings of the commission, based on a plea saying the inquiry panel was functioning in a biased manner. The hospital where Jayalalithaa was treated appealed to the apex court against the commission’s order, rejecting its request to constitute a 21-member medical expert committee to enquire into the treatment given to Jayalalithaa. Following this, the commission’s proceedings came to a temporary halt in April 2019. Following this, on October 15, 2019, Arumughaswamy, as the head of the commission, wrote to the state government to instruct its law officer in the Supreme Court to file a petition and to get the stay revoked. After a month’s delay, the state government filed a petition in the apex court on December 10, 2019.

In a statement, Stalin stirred a row within the ruling AIADMK. “Justice Arumughaswamy had made a strong charge that the advocate general and the additional advocate general were merely watching the litigation. He had openly levelled the allegation that the litigation was being delayed. His allegations have exposed that Chief Minister Edappadi K. Palaniswami and O. Panneerselvam have deliberately delayed the case to protect their seats,” Stalin said in the statement. He also added that the letter is a clear proof that the chief minister and the deputy chief minister were not interested in unravelling the conspiracy and completing the case.

In the early days, it was Deputy Chief Minister O. Panneerselvam who insisted on a probe, but subsequently did not depose before the commission. Despite the commission sending summons to him to appear before it, OPS chose to remain silent. The probe panel headed by Justice A. Arumughaswamy was set up in September 2017, a month after OPS merged his faction with the EPS-led ruling AIADMK.

Stalin’s statement was the outcome of a detailed letter by the Arumughaswamy panel, quoting the earlier government orders and the status of the stay petition pending in the Supreme Court. The letter, written to the state government on October 16, a copy of which is available with THE WEEK, comes down heavily on Tamil Nadu’s Supreme Court advocates for not pursuing the legal battle to vacate the interim stay order on the commission’s functioning. The commission said that the action of the Supreme Court advocates makes it "think that the advocates are allowing the hearing to be delayed as a mute spectator".

Both Palaniswami, who heads the government, and Panneerselvam, who was particular in bringing out the mystery behind the death of 'Amma', are yet to react to the commission’s letter.