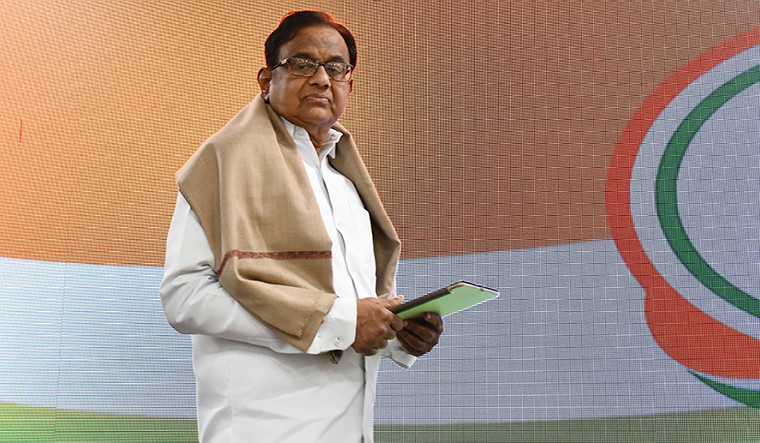 pSenior Congress leader P. Chidambaram today dismissed the latest stimulus package announced by the Centre as 'Khoda pahaad, nikla chuha' (dig a mountain and find a mouse') and said it is another sly attempt to dazzle the people with exaggerated numbers.

Chidambaram also criticised the government for trying to play the role of 'ma-baap' (parents) by telling government servants what amount and on what goods and when they should spend their own money.

"Just as the BJP has been telling people what to eat, what to wear, what language to speak, who to love, who to marry etc., it is now trying to control people on their spending preferences. This is another piece of retrograde interference in people’s lives," he said.

"After carefully reading the statement of the finance minister on the so-called stimulus package, I am reminded of the Hindi proverb Khoda Pahaad Nikla Chuha," he said.

The former Union finance minister said yesterday's announcement was no stimulus package to push economic growth but "another sly attempt to dazzle the people with exaggerated numbers and lead them to believe that the government is hands-on and responsive to the needs of the people and the economy".

He said it also amounts to a candid confession that the earlier ‘Rs 20 lakh crore package’ was a massive failure.

"It was a failure because it was a hoax. Remember that, yesterday, we also got the news that the IIP had contracted for the sixth month in a row and retail inflation surged to 7.34 per cent. More worryingly, nearly all of the rise in CPI inflation was due to a steep rise in the prices of vegetables that has hurt the homemaker the most," Chidambaram said.

He said the numbers claimed this time, too, are a hoax. "The stimulus is not of a value of Rs 73,000 crore. Nor is it of the value of Rs 1,00,000 crore, another number that has been thrown at us. The fiscal impact of these announcements is estimated by analysts to be a mere 0.1 per cent of GDP," he said, adding he was amazed by the use of the phrase ‘demand infusion’.

Critiquing the specifics of the yesterday's announcement, he said the Rs 10,000-crore interest-free festival advance to government servants is not additional expenditure since it will be recovered in ten monthly installments and hence was like buying on equated monthly installments.

The Rs 12,000 crore offered to the states, the veteran leader said, is not a grant but a loan. All the big states put together will get Rs 7,500 crore which is a minuscule fraction of the capital expenditure of Rs 9,00,000 crore budgeted by the states for 2020-21 and will make little difference, he said.

Chidambaram described the offer of a tax concession to 35 lakh central government employees on LTC as a "pathetic attempt to induce them to spend twice that amount out of their own money to gain a small benefit on tax". The finance minister, he said, has also dis-incentivised encashing 10 days of leave by requiring that it must be spent as stipulated by the government in order to get the "paltry" tax benefit.

"The most deserving people who need the money desperately have once again been left in the cold. They are the bottom half of the families in India. Government stubbornly refuses to make a cash transfer to their accounts as recommended by dozens of economists and as demanded by the Congress and other political parties," Chidambaram said.