Hathras rape case: Around 80 detained from protests outside UP Bhawan in Delhi Congress workers and Left activists alike were detained on Wednesday after they tried to stage a protest around the Uttar Pradesh Bhawan in Delhi against the gang rape and death of a 19-year-old woman in Hathras, demanding justin for the victim and her family.

The protesters assembled outside the UP Bhawan, but were detained immediately and taken to Mandir Marg police station, police told PTI.

The protesters were stopped by the police who erected a barricade near the UP Bhawan.

Some of the Indian Youth Congress protesters were detained by the police and taken to Mandir Marg and Connaught Place police stations, said IYC media in-charge Rahul Rao. 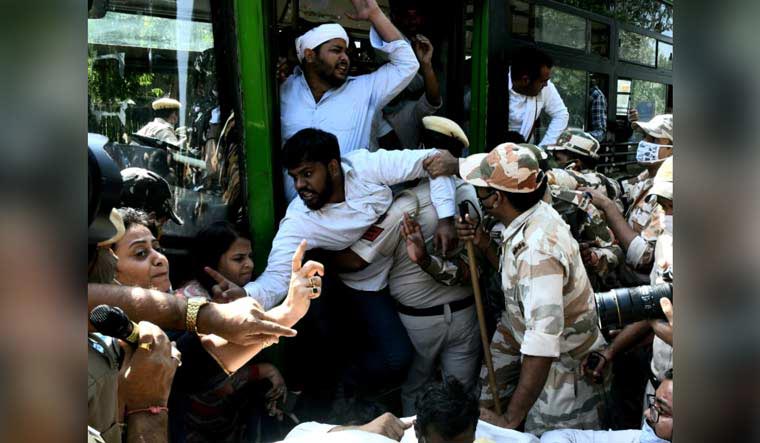 As for the Left protestors, the protest was called by the All India Students' Association (AISA), All India Progressive Women's Association (AIPWA) and other student and women's organisations.

The protesters demanded the resignation of Uttar Pradesh Chief Minister Yogi Adityanath and alleged that the state has become unsafe for women. They also demanded justice for the woman, who died at a Delhi hospital on Tuesday.

Soon after the protesters reached the site, Delhi Police started "forcefully detaining" them, the AISA said.

All students and activists, including AISA Delhi secretary Prasenjeet Kumar, were detained at Mandir Marg police station, it said. 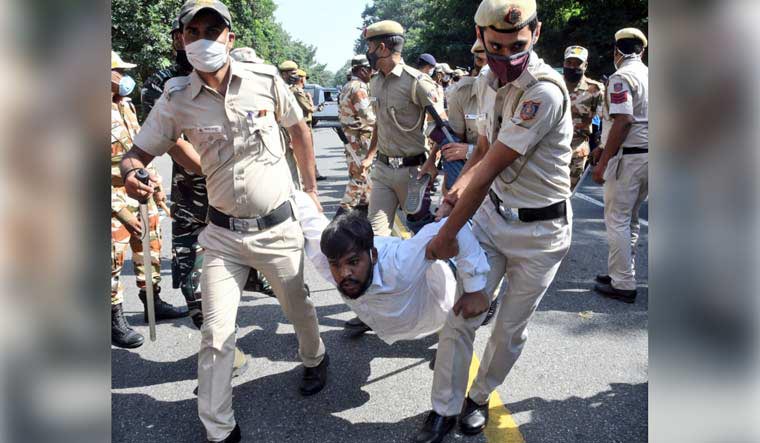 "The protest continued at the police station with students raising slogans," it said.

A senior police officer said a total of 80 people, including 44 women, were detained.

As the protesters violated prohibitory orders under Section 144 of the CrPC in force in the area and other restrictions regarding COVID-19, an FIR under section 188 (Disobedience to order duly promulgated by public servant) of the Indian Penal Code and other relevant sections of the Epidemic Diseases Act and the Disaster Management Act has been registered against the protesters, he said.

All the protesters were detained and taken to Mandir Marg and Connaught Place police stations, the officer said. 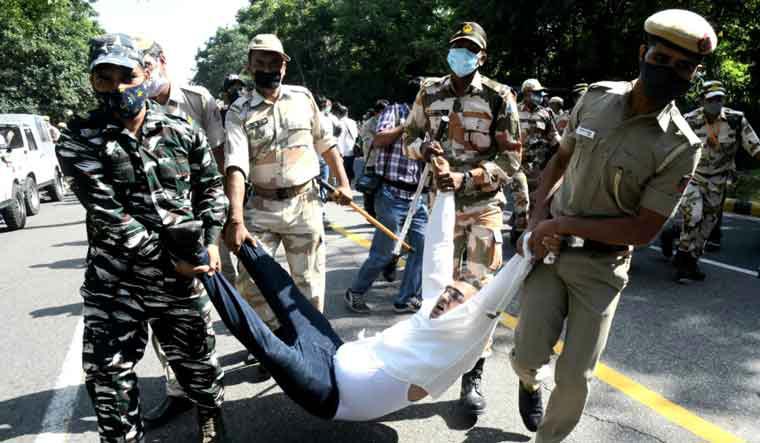 The 19-year-old woman was brutally gang-raped in a village in Hathras district two weeks ago. She died of her grievous injuries at a Delhi hospital on Tuesday, prompting outrage, protests and calls for justice.

The woman was gang-raped on September 14 following which she was admitted to the J N Medical College Hospital in Aligarh with serious injuries. She was referred to Delhi's Safdarjung Hospital on Monday after her condition showed no signs of improvement.