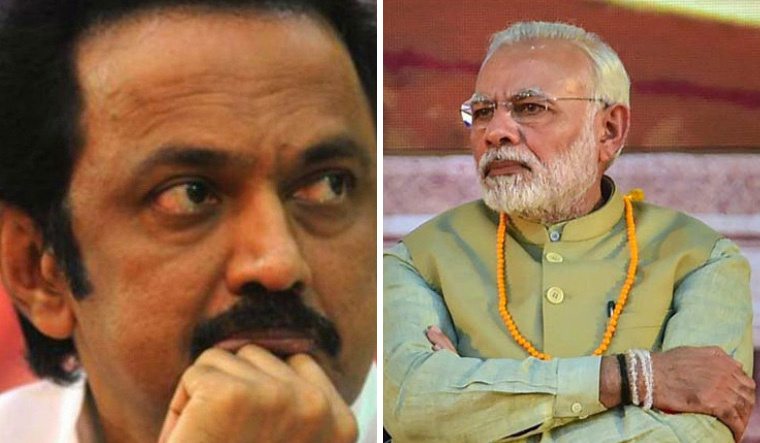 Stalin lashed out at Modi for protecting the EPS-OPS-led AIADMK government in Tamil Nadu, like a “guard" | File

A day after the CBI informed the trial court that there is no evidence to prosecute industrialist J. Sekar, aka Sekar Reddy, and five others in the 2016 cash seizure case, immediately after demonetisation, DMK president M.K. Stalin asked why Prime Minister Narendra Modi is protecting the EPS-OPS-led AIADMK government in Tamil Nadu, like a "guard".

“It is surprising that the BJP government at the Centre has given a loving gift to the AIADMK government in Tamil Nadu by closing the CBI case against sand-mining baron Sekar Reddy,” Stalin pointed out in a statement. He noted how the case against Reddy has been closed by saying that there is no evidence.

He also recalled various other cases like Karur Anbunathan issue, Gutkha diary, corruption during RK election, Pollachi sexual abuse case, the mysterious murders in Kodanad estate and the PM Kisan scam. “Clean chit given to Sekar Reddy is a clear indication of the collusive nature of relationship between AIADMK and the BJP,” he added.

He said it was surprising that even after examining 170 witnesses and perusing 800 documents, the CBI was not able to fix any accused in the infamous Sekar Reddy scam. “The CBI, which used to investigate with just bit papers in hand, could not get evidence as to from which bank Sekar Reddy had got the 2,000 rupee currency notes during demonetisation.”

Stalin said it could be easily understood how the investigation happened, when “a high court itself asked the CBI as to why not even one bank manager has been accused in the case.” He added that it also can be understood why the serial numbers of the new currency notes could not be found, at a time when Sekar Reddy is close to Chief Minister Edappadi K. Palaniswami and Deputy Chief Minister O. Panneerselvam. “No wonder the case was closed by the CBI the same day when the AIADMK had its executive council happening," he said.