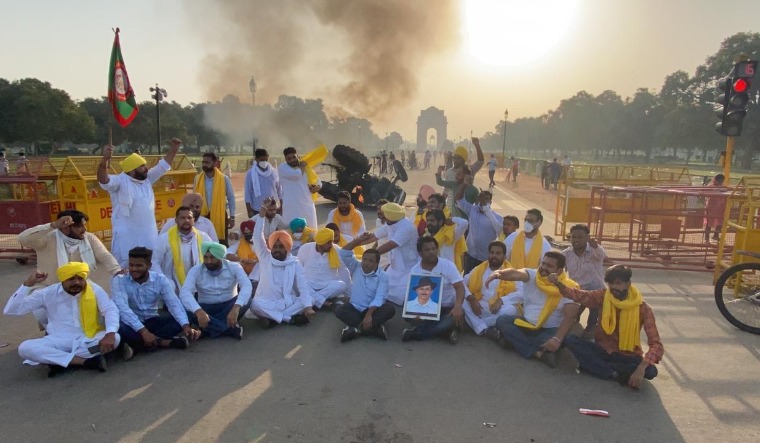 Around 15-20 people set a tractor on fire at India Gate in Delhi on Monday morning, police said. The Punjab unit of the Youth Congress claimed responsibility for the incident, which happened during a protest against three contentious farm sector laws.

The incident comes amid protests by farmers and opposition parties across the country over the contentious farm legislations that were passed by the Parliament last week. The legislations were approved by President Ram Nath Kovind on Sunday.

According to fire officials, they received information regarding the incident at 7.42am and two fire tenders were rushed to the spot.

"About 15-20 people had gathered around 7.15-7.30am and tried to set a tractor on fire. The fire has been doused off and tractor was removed. Legal action is being taken in the matter. Identity of the persons involved is being ascertained," Deputy Commissioner of Police (New Delhi) Eish Singhal said.

The Punjab Youth Congress tweeted the protest was organised to mark the birth anniversary of revolutionary Bhagat Singh. The main Youth Congress handle tweeted, "In honour of the memory of Shaheed #BhagatSingh, @IYCPunjab protested against the BJP govt's apathetic treatment of farmers by lighting a tractor at India Gate. Wake the sleeping govt."

Meanwhile, Punjab Chief Minister Amarinder Singh is due to hold a dharna at the ancestral village of Bhagat Singh on Monday to protest against the farm laws. Amarinder will hold the dharna at Khatkar Kalan on Monday after paying tribute to Shaheed Bhagat Singh at his Samadhi Sthal.

Terming the president's assent to the farm laws as "unfortunate and distressing", Punjab Chief Minister Amarinder Singh on Sunday said his government is exploring all options, including possible amendments to the state laws, to protect farmers’ interests.

All farmer organisations and other stakeholders will be taken into confidence before taking any decision on the way forward, the chief minister said, adding that his government was committed to the procurement of every single grain of farmers without compromising on the pricing.

The state government is already consulting legal and agriculture experts, and all those impacted by the Centre’s “calamitous” legislations to decide the future course of action, he said.

Besides legal recourse, Amarinder said his government is looking at other options to scuttle the Centre's new laws that are “designed to ruin Punjab's farmers and economy”.